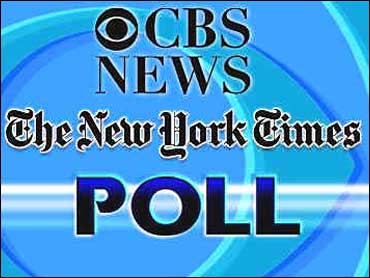 LOOKING BACK: THE WAR IN IRAQ
As the one-year anniversary of the Iraq war approaches, Americans continue to doubt whether the war in Iraq was worth the costs, although more than half think the U.S. made the right decision to get involved there, underscoring the nearly even split on evaluating the President's handling of Iraq. Half say the war was not worth the loss of American life and other costs of attacking Iraq, while 42 percent say it was worth it.

WAS IRAQ WAR WORTH THE COSTS?
Yes

Nevertheless, 58 percent of Americans think the U.S. did the right thing in taking military action against Iraq, but this number has been on the decline recently. 37 percent now say the U.S. should have stayed out of Iraq.

DID THE U.S. DO THE RIGHT THING GOING TO WAR WITH IRAQ?

LOOKING AHEAD: POTENTIAL TICKETS
A Democratic ticket of John Kerry and John Edwards - who just left the Democratic contest and endorsed Kerry -- runs only marginally better against the Republican incumbents in this poll than when respondents are asked to choose only between Kerry and Bush. And the ticket fares less well than it did two weeks ago, when Kerry and Edwards were leading Bush and Cheney by eight points.

The Democrats do less well in this poll if Congressman Dick Gephardt of Missouri -- another of Kerry's rivals from the nomination fight -- is added to the ticket. A Kerry-Gephardt ticket falls behind Bush-Cheney by six points.

One surprise: Bush's running mate, Vice President Dick Cheney, still remains unknown to many voters even after more than three years in office. 43 percent of voters either have not heard enough about Vice-President Cheney, or have no opinion of him one way or the other. Those voters who are familiar with the Vice-President are more positive than negative about him, a reversal of his standing among registered voters from January, though still well below the levels he attained in November of 2000.

NADER'S IMPACT
Independent candidate Ralph Nader is not known to 48 percent of voters, but he also elicits overwhelmingly negative reviews from the votes who do know him: just 14 percent have a favorable view of him while 37 percent hold an unfavorable view of the consumer advocate and former Green Party Presidential nominee. Nader is viewed slightly more favorably by Democrats than Republicans.

So when included on the ballot -- something that may not be the case in all 50 states come November -- Nader draws 7 percent of the vote, mostly at Democrat John Kerry's expense. With Nader on the ballot Kerry's share drops to 38 percent, while Bush's holds steady at 46 percent.

But as they look ahead to November, more voters expect George W. Bush to ultimately prevail in the election: 44 percent expect the President to win in the fall, and 35 percent expect John Kerry to win. Democratic voters are more pessimistic about their man's chances than Republican voters are about theirs. One in five Democrats expects Bush to win; only one in ten Republicans thinks Kerry will unseat the incumbent.

THE ECONOMIC POLICIES OF THE BUSH ADMINISTRATION
The economy is clearly the President's greatest weakness. The public continues to fault the Bush Administration for failing to create new jobs in the U.S., has yet to see positive effects of the Administration's policies on prescription drugs, or personal benefits of the Bush tax cuts.

EFFECT OF BUSH'S POLICIES ON THE JOB MARKET:
Increased the number of jobs

ADMINISTRATION'S POLICIES HAVE MADE PRESCRIPTION DRUG COSTS FOR THE ELDERLY:

THE ECONOMY AND MOOD OF THE COUNTRY
54 percent now think the U.S. has seriously gotten off on the wrong track; 38 percent say the country is headed in the right direction. Views on this question have become significantly more negative since last December.

Views of the direction of the country are closely tied to views about the overall state of the U.S. economy. Nearly half of Americans say the economy is worse today than it was when Bush first took office in 2001; one in five think the economy is now better than three years ago, and just over a quarter say it is the same.

THE ECONOMY IS GETTING…

The public assessed its personal financial situation more positively at this point in 1996, the year Bill Clinton ran for re-election. In February 1996, by 33 percent to 17 percent, Americans said their families were financially better off compared to four years before, when Clinton first took office.

HOW WOULD THE ECONOMY BE IF 9/11 HAD NOT HAPPENED?

But 9/11 imagery, in general, may not find favor with the public. President Bush has recently come under criticism for using images of that day in recent campaign commercials, and most Americans believe that in general, use of 9/11 images is not appropriate. 61 percent say it is not acceptable to use such images and just one-third say it is all right.

ACCEPTABLE TO USE 9/11 IMAGES IN CAMPAIGN ADS?
Yes

THE BUSH POLICIES ON TERRORISM
The Administration does show strength on one aspect of its policies, however: most Americans think the policies of the Bush Administration have made the U.S. safer from terrorism.

Six in ten say the Bush Administration's policies have made the U.S. safer from the threat of terrorism (mirroring the 64 percent approval rating the public gives President Bush on his handling of terrorism). 17 percent think the Administration's policies have made the U.S. less safe, and another 17 percent say they had no effect.

POLICIES OF THE BUSH ADMINISTRATION HAVE:

Last week's terrorist attacks in Spain happened while this poll was in the field, and interviewing was completed the day of the Spanish election, but views on this question did not vary significantly before and after news broke about the attacks.

This poll was conducted among a nationwide random sample of 1206 adults, interviewed by telephone March 10-14, 2004, including 984 registered voters. The error due to sampling for results based on the entire sample and for registered voters could be plus or minus three percentage points. Sampling error for subgroups may be higher.
For detailed information on how CBS News conducts public opinion surveys, click here.