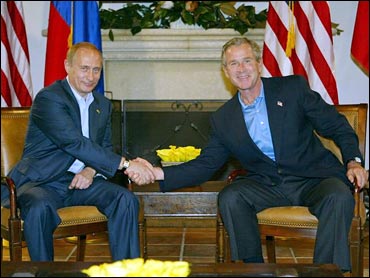 Beth Knobel has been CBS News' Moscow bureau chief for the past seven years.


When Presidents Bush and Vladimir Putin meet they're likely to be all smiles — despite the serious issues on the table.

Like how to disarm Iran and North Korea. Or get Russia into the World Trade Organization. Or provide America with more Russian oil.

The two leaders will be meeting one on one Friday and Saturday before the start of the G8 summit of industrialized nations in St. Petersburg, Russia.

Progress may be harder than usual because U.S.-Russian relations are especially tense.

Analyst Dmitri Trenin of the Carnegie Moscow Center says that part of the problem is that America's view of Russia is out of date. "The West is dealing with a Russia which is out of the 1990s," he says. "It's a very different player (than it was) in many ways."

Whatever its reasons, the Bush administration has clearly hardened its line on Russia during the past few months.

The point man: Vice President Dick Cheney, who slammed Russia for backtracking on democratic reforms, and for trying to use its oil and gas as a political tool.

"In Russia today, opponents of reform are seeking to reverse the gains of the last decade," Cheney told a conference in Vilnius, Lithuania in May. "In many areas of civil society — from religion and the news media, to advocacy groups and political parties — the government has unfairly and improperly restricted the rights of her people."

"Other actions by the Russian government have been counterproductive, and could begin to affect relations with other countries," the vice president warned.

Putin hit back in his annual state of the nation address by referring to America as "a wolf" that does what it likes without listening to anyone else.

And this week, Putin shot back again, telling NBC News that Cheney's recent criticisms of Russia were like "an unsuccessful hunting shot" — a reference to the vice president's infamous hunting accident where he shot a friend.

There's lots of posturing going on. After all, this is politics. But underneath it all, their advisors make it clear that Putin and Mr. Bush really do understand many of the world's problems require their joint efforts.

"It's a kind of political game, and everyone does what he's supposed to do," Russia's representative to the G-8, Igor Shuvalov, told CBS News. "They (the two presidents) understand there are difficulties, but they have to cope with this somehow."

So, with their meeting at hand, the two leaders have called a truce and stopped any sharp rhetoric against each other.

Last week, Mr. Bush said he likes Putin very much and Putin called the American president "a decent and honest person." It's positive spin on a relationship that may or may not yield results.
By Beth Knobel