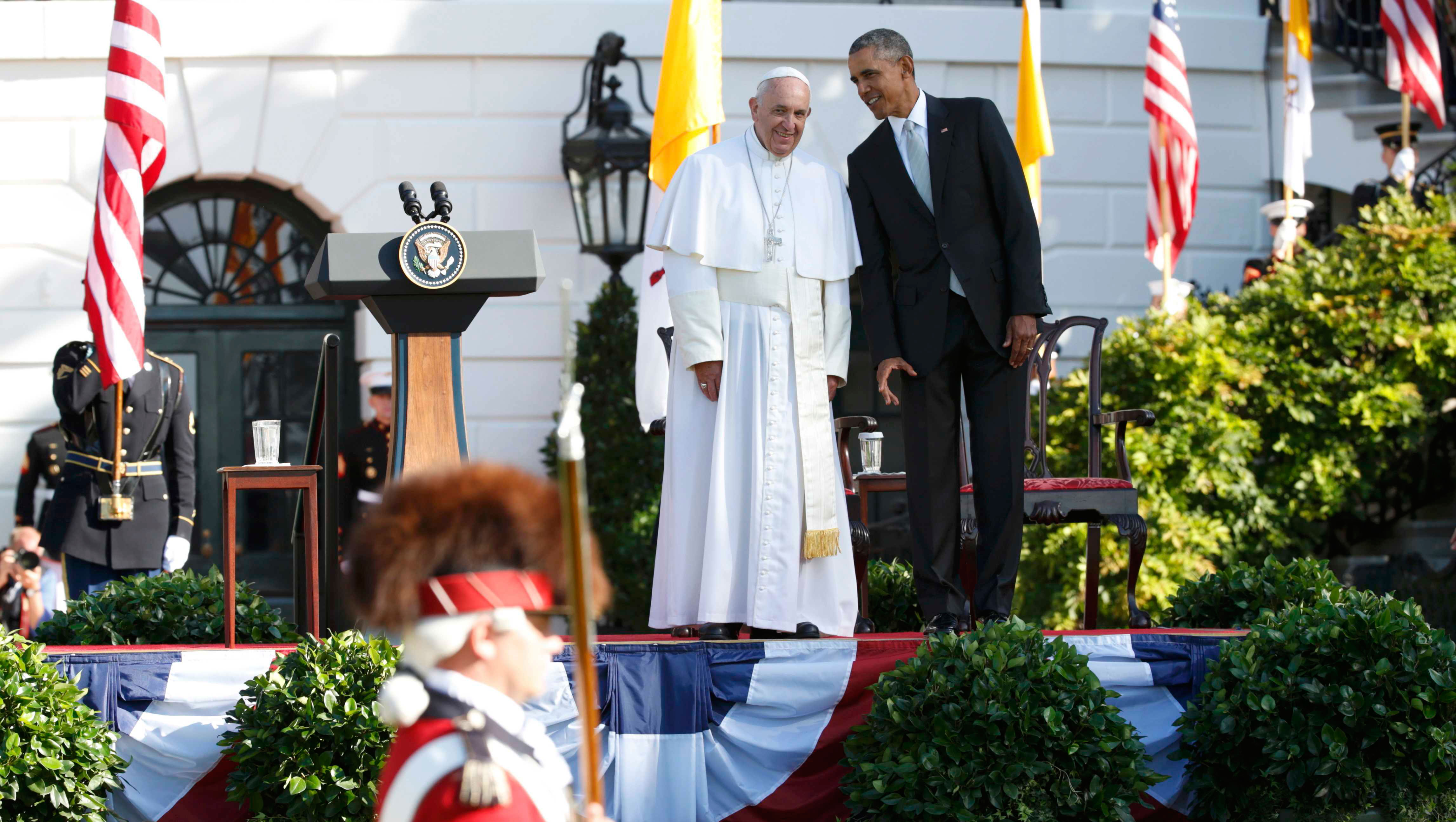 In his first remarks on U.S. soil, Pope Francis on Wednesday commended President Obama for tackling the air pollution and made the case that Christians have an obligation to be responsible stewards of Earth.

"As Christians... we wish to commit ourselves to the conscious and responsible care of our common home," Francis said from the White House South Lawn, where he was greeted by President Obama, government officials, Catholic dignitaries and at least 11,000 others.

"Climate change is a problem which can no longer be left to a future generation," said the pope, speaking in English. "When it comes to the care of our common home, we are living at a critical moment of history. We still have time to make the changes needed to bring about a sustainable and integral development, for we know that things can change."

He added that the world's citizens are also obligated to improve the world that will be left to "the millions of people living under a system which has overlooked them."

He continued, "To use a telling phrase of the Reverend Martin Luther King, we can say that we have defaulted on a promissory note and now is the time to honor it."

Pope Francis also stressed the importance of religious liberty, which he called " one of America's most precious possessions." He also noted that he's traveling to Philadelphia this week for the Eighth World Meeting of Families, "to celebrate and support the institutions of marriage and the family at this, a critical moment in the history of our civilization."

The pope's remarks on the White House South Lawn marked his first official stop on his three-day tour of the United States. President Obama hailed Pope Francis for setting a "profound moral example" for the world.

"You call on all of us, Catholic and non-Catholic alike, to put the 'least of these' at the center of our concern," Mr. Obama said. "Our backyard is not typically this crowded - but the size and spirit of today's gathering is just a small reflection of the deep devotion of some 70 million American Catholics."

Yet the excitement surrounding Francis' first-ever visit to the United States, the president continued, "must be attributed not only to your role as pope, but to your unique qualities as a person. In your humility, your embrace of simplicity, the gentleness of your words and the generosity of your spirit, we see a living example of Jesus' teachings, a leader whose moral authority comes not just through words but also through deeds."

"This is an opportunity for two men who have so many values in common, to talk about the efforts that they are taking in their respective and quite different roles to advance those shared values," Earnest said.

While there is unlikely to be a "robust" discussion of any political agenda, Earnest added that it will be more than just a "social meeting."

"I think that the way that both of these men have dedicated their lives to advancing values related to social justice and prioritizing those who are less fortunate, and that they pursue those values with a sense of conviction, I think gives them a lot of serious things to talk about," he said.

Pope Francis has indeed put a strong emphasis on helping the poor, arguing that too much focus on issues like marriage and abortion could alienate people from the Catholic Church. The pope has also cooperated with Mr. Obama in matters of foreign policy, helping thaw relations between the United States and Cuba.

Even so, the church still strongly condemns abortion and same-sex marriage -- just two issues where Mr. Obama's political agenda may diverge from the pope's.

Earnest said that Mr. Obama will listen to whatever Francis has to say with "a very open mind" and with "a spirit of respect."

While the pope falls in line with liberals on some issues and conservatives on others, some conservatives have taken issue specifically with Francis' strong concerns about climate change. At least one Republican congressman is boycotting Francis' address to a joint session of Congress on Thursday over his position on climate change.

Asked about the political leanings of his teachings, Francis on Tuesday said, "I have never said anything that was not in the social doctrine of the church." To call him left-leaning, Francis told reporters on his flight from Cuba to the United States, "would be an error of interpretation."

Following his White House meeting, the pope's schedule includes a ride in the Popemobile in a parade in downtown Washington, D.C. Then he meets and prays with North American Bishops at St. Matthew's Cathedral. After that, the pope heads to the Basilica of the National Shrine of the Immaculate Conception in Washington, where he will deliver a full mass in Spanish and canonize Father Junipero Serra.