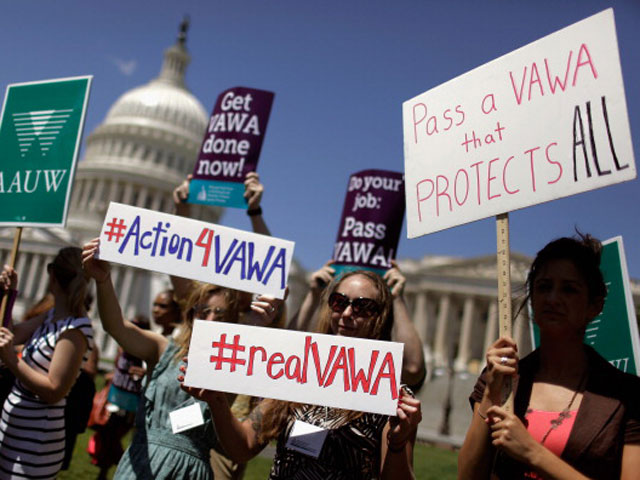 The new version of the law includes several new measures, including granting Native American tribes jurisdiction to prosecute non-native perpetrators of domestic and sexual violence against native women. Previously, tribes had no jurisdiction over non-tribal members, even if they are married to native women or reside on native lands.

But, said Obama Thursday, "as soon as I sign this bill, that ends."

According to Tina Olson, co-director of Mending the Sacred Hoop, an advocacy group dedicated to fighting violence against native women, as many as 50 percent of native women marry non-native men. This means that if they become victims of domestic violence, they have little recourse through the tribal justice system.

"It's not as if native women want something unique," says Olson. "They just want the justice other women get."

Olson says she has "high hopes" about how the new law will help tribal women, but is taking a "wait and see" attitude until funds for enforcement - and consequences for failing to enforce - arrive.

In addition to the new provisions aiming to protect Native American women, the re-authorized VAWA allows groups representing Lesbian, Gay, Bisexual and Transgendered men and women to apply for grants to prevent sexual violence and care for victims. The new law also includes the SAFER Act, which aims to whittle down the backlog of DNA tests - often known as "rape kits" - in police storage around the country; and the Trafficking Victims Protection Reauthorization Act which provides services to victims of human trafficking.

VAWA expired in September 2011 and stalled in Congress after the House of Representatives balked at some of the new provisions in the version passed by the Senate. House Republicans drafted an alternative bill, but it failed when brought for a vote on Feb. 28. Later that day, the House voted 286 -138 to pass the Senate version.

Ariel Zwang, the CEO of SafeHorizon, a group that provides shelter and services to victims of domestic violence, says that as important as the new protections the reauthorized VAWA provides is the message the passage of the law sends to victims and perpetrators of domestic and sexual violence.

"Before VAWA, society's response to domestic violence was basically to tell the guy to go walk around the block," says Zwang. The law, she says, makes a national statement that "this is wrong, it's a crime, and we're going to talk about it and prosecute it."

President Obama agreed, saying Thursday afternoon that the original law "made it possible for us to talk about domestic abuse." The new law, he said, assists immigrant women whose status may be tied to an abusive spouse and "expanded housing assistance so that no woman has to choose between a violent home and no home at all."