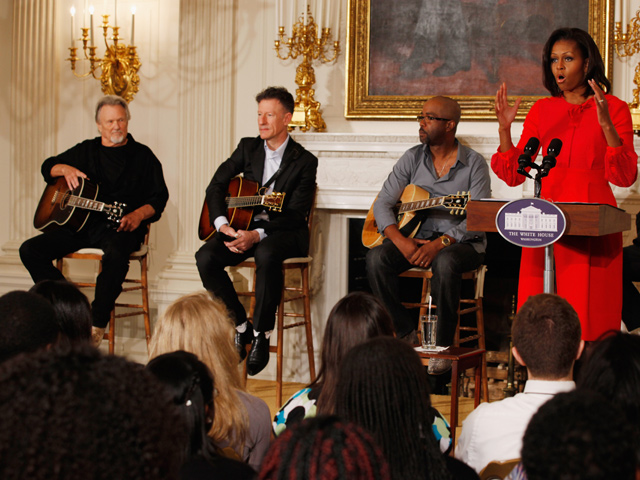 The president told guests that country music tied together many threads of the nation's immigrant heritage, from the Irish fiddle, the German dulcimer, the Italian mandolin, the Spanish guitar and the West African banjo.

"At its most pure, that's what country music is all about -- life in America. It's about storytelling -- giving voice to the emotions of everyday life."

Mr. Obama said the concert was a fitting tribute to the impact of country music on American life. Since first running for president, Mr. Obama said, "I've hopped on planes to big cities. I've ridden buses through small towns. And along the way, I've gained an appreciation for just how much country music means to so many Americans."

In 2009, first lady Michelle Obama created a White House music series that has celebrated jazz, country, classical, Motown and Latin music. She has also arranged salutes to Broadway, the music of the civil rights movement and to Judith Jamison, an Alvin Ailey dancer and artistic director.

"Country Music: In Performance at the White House" will be broadcast Wednesday at 8 p.m. ET on PBS stations and shown at a later date on the American Forces Network to military service personnel around the world.