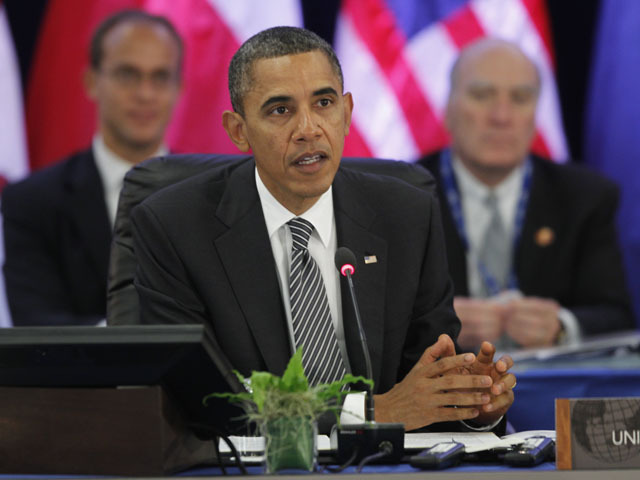 WASHINGTON-- Despite formidable opposition across the political spectrum, President Barack Obama is using his final months in office to fight for congressional approval of a 12-nation free trade pact called the Trans-Pacific Partnership.

President Obama plugged the trade agreement Monday in China, saying it is “indisputable that it would create a better deal for us than the status quo.” He said he doesn’t have to sell the deal to Asian leaders who were part of the negotiations because “they see this as the right thing to do for their own countries.”

A survey by the Pew Research Center estimated that 39 percent of registered voters view TPP as a bad thing for the United States and 37 percent consider it a good thing, hardly the kind of numbers that would inspire Congress to heed the president’s call.

Where things stand on the agreement and President Obama’s effort:

WILL CONGRESS VOTE ON TPP?

It’s hard to argue with House Speaker Paul Ryan’s assessment that TPP doesn’t have the votes to pass. Throw in Senate Majority Leader Mitch McConnell’s statement that the Senate would not take up the agreement this year and TPP’s prospects look dismal.

Last year, the House barely passed legislation establishing a streamlined process for approving TPP, called “fast-track,” but the details of the actual agreement were not made public until November. Since then, about a dozen Republicans who voted for the fast-track process have switched and said they oppose the deal, seemingly eliminating a narrow cushion of support.

That leaves the administration and other TPP supporters with a tough task. The ripest recruiting grounds: 50 GOP lawmakers who voted against fast-track. Many consider themselves free-traders but voted no for separate reasons.

The fight in the Senate could be easier since supporters only need a simple majority for passage rather than the 60 votes usually needed for advancing legislation.

Business groups that want the agreement approved used the August recess to lobby lawmakers and their staffs.

Foes of TPP have been heartened by the dire talk from congressional leaders. But many suspect a vote is looming. Witness the fundraising pitch from the politically active nonprofit launched by Sen. Bernie Sanders, a Vermont independent who tells potential donors that “we will have a very, very narrow window” to defeat TPP in the lame-duck session after the elections.

WHAT’S THE PATHWAY FOR PASSAGE?

The top concern of lawmakers is that the protection of clinical testing data for certain drugs made from living organisms, called biologics, falls short of the 12 years required by U.S. law.

TPP requires countries to provide eight years of data protection, and possibly only five if they take other steps.

Led by Sen. Orrin Hatch of Utah, the Republican chairman of the Senate Finance Committee, lawmakers want the U.S. standards to prevail. The Obama administration will try to work out some language during September and October that satisfy Hatch’s concerns, though any insistence that countries accept a baseline closer to the U.S. standard could prompt other nations to walk.

Hatch also insists that participating countries provide the U.S. with roadmaps for how they intend to implement the agreement​. The Obama administration has sent negotiators to begin that work.

Eventually, the administration will send draft legislation to Congress with the changes in U.S. law needed to enact the trade deal. Given the political winds, it probably won’t happen until after the election.

HOW DOES OBAMA SEAL THE DEAL?

The president’s case for TPP emphasizes two points: First, he says it’s good for the economy because it eliminates thousands of tariffs that will lower the price for American-made goods and services.

Second, it’s good for U.S. national security because it demonstrates America’s commitment to being a Pacific power. While the administration has been making both cases from the get-go, the closing argument for TPP increasingly has taken a national security emphasis.

Deputy national security adviser Ben Rhodes said TPP is a “litmus test for whether or not the U.S. has staying power in this region.”

WILL TPP SURVIVE UNDER NEXT PRESIDENT?

It’s not obvious how it could survive, given both candidates say they oppose TPP, but history has shown that opposition during the heat of a campaign​ can turn to support if the right changes are made. President Obama said ratifying trade deals in the U.S. is never smooth, but eventually they get done.

Trump has made his opposition to TPP a hallmark of his campaign. Clinton supported TPP efforts as secretary of state but announced her opposition last October, saying the final agreement failed to meet her test of providing good jobs, raising wages and protecting national security.

Influential advocacy groups such as the U.S. Chamber of Commerce, the American Farm Bureau and others will try to find a way to pick up the pieces if TPP doesn’t make it this year. They’ve seen the long, winding road that most trade agreements take.

“The interests will persist regardless of who is in the office,” said Scott Miller, a former director for global trade policy at Procter & Gamble, now at the Center for Strategic and International Studies.