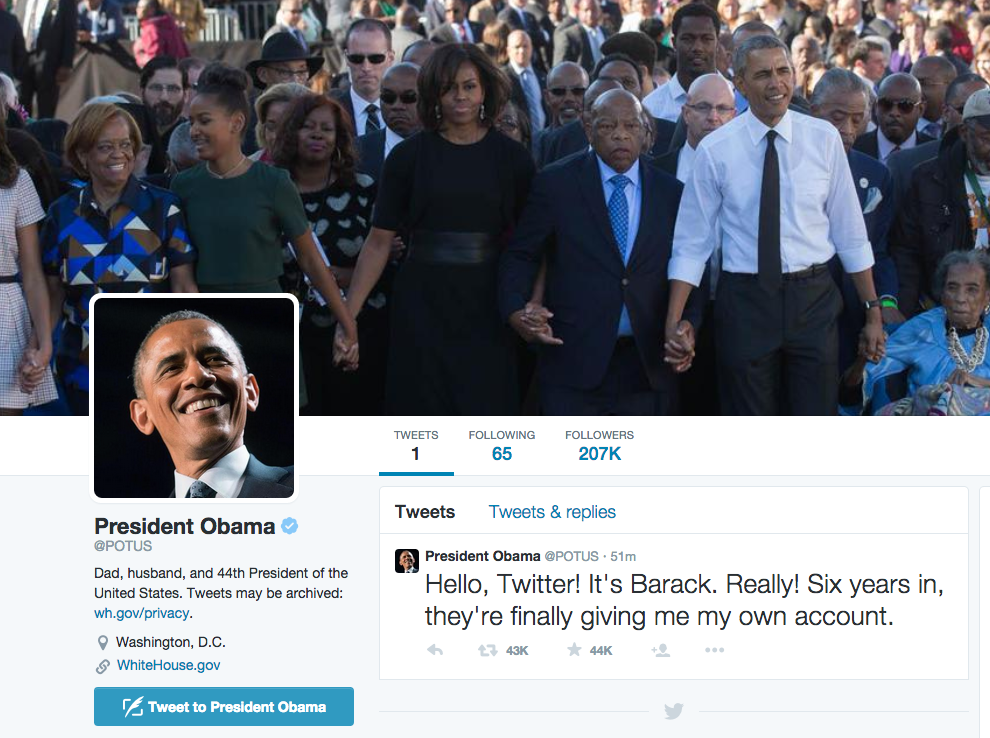 President Obama on Monday unveiled his very own official, verified Twitter account, with the handle @POTUS (for "President of the United States").

Previously, those looking for Mr. Obama's point of view on Twitter would have to turn to @WhiteHouse, the official account for the administration, or @BarackObama, an account run by Organizing for Action, the nonprofit that evolved from Mr. Obama's campaign organization Obama for America. When either of those accounts tweeted a message directly from Mr. Obama, it would end with the signature, "-bo."

According to a White House press release, Mr. Obama sent his first @POTUS tweet from the Oval Office. The new account, the White House said, will serve as a new way for the president "to engage directly with the American people, with tweets coming exclusively from him."

By Monday evening, the president had accumulated more than 1.2 million followers. He also followed 65 other Twitter accounts, including the universities he attended, Chicago sports teams, cabinet agencies and members of his administration (including Vice President Biden.) He's also following the former presidents on Twitter -- George H.W. Bush and Bill Clinton -- and, of course, First Lady Michelle Obama.

The president will be the only one tweeting from the @POTUS account, which was an inactive account that the White House worked with Twitter to obtain. One of his predecessors was curious about the fate of the username after President Obama's tenure is finished.

The answer: once Mr. Obama leaves the White House, he'll pass on the account to the next president.