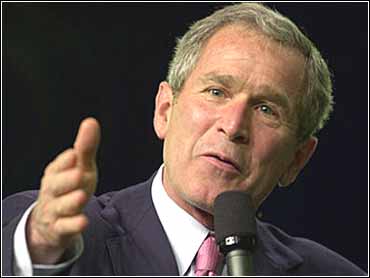 The administration informed a House committee of the decision prior to a congressional hearing Thursday on the Boston case involving the FBI's handling of informants.

In a memo to Attorney General John Ashcroft, the president explained his decision.

"It is my decision that you should not release these documents or otherwise make them available to the committee," Mr. Bush wrote. "I have decided to assert executive privilege with respect to the documents."

Mr. Bush wrote that the "disclosure to Congress of confidential advice to the attorney general regarding the appointment of a special counsel and confidential recommendations to Department of Justice officials regarding whether to bring criminal charges would inhibit the candor necessary to the effectiveness of the deliberative process by which the department makes prosecutorial decisions."

The decision immediately affects a subpoena from the House Government Reform Committee for documents related to 1960s murders in Boston. More importantly, it sets a new policy in the works for months in which the administration will resist lawmakers' requests to view prosecutorial decision-making documents that have been routinely turned over to Congress in years past.

"I believe congressional access to these documents would be contrary to the national interest," Mr. Bush wrote in his memo to Ashcroft.

Executive privilege is a doctrine recognized by the courts that ensures presidents can get candid advice in private without fear of its becoming public.

The privilege, however, is best known for the unsuccessful attempts by former Presidents Nixon and Clinton to keep evidence secret during impeachment investigations.

Aware the White House was considering such a new policy, members of Congress have raised concerns that it will hinder lawmakers from giving proper oversight to federal prosecutions, noting scandals in the past would never have been exposed if Congress had been kept from sensitive documents.

"If this unprecedented policy is permitted to stand, Congress will not be able to exercise meaningful oversight of the executive branch," Rep. Dan Burton, R-Ind., said recently.

Burton is chairman of the House panel that has been trying to obtain documents from various federal cases in which lawmakers want to examine the conduct and decisions of prosecutors and FBI agents.

While invoking the privilege, Bush instructed Ashcroft to have the Justice Department "remain willing to work informally with the committee to provide such information as it can, consistent with these instructions and without violating the constitutional doctrine of separation of powers.

The committee subpoenaed Ashcroft, demanding those documents in the fall and scheduled a hearing Thursday to examine the Boston case.

That case stems from revelations that Joseph Salvati of Boston spent 30 years in prison for a murder he did not commit even though the FBI had evidence of his innocence. Salvati was freed in January after a judge concluded that FBI agents hid testimony that would have cleared Salvati because they wanted to protect an informant.

Several such memos were shared with Congress during both Republican and Democratic administrations. Most recently, in the 1990s, such documents were turned over to the Whitewater, fund-raising, pardons and impeachment investigations by lawmakers.

But the concept of extending executive privilege to Justice Department decisions isn't new. During the Reagan years, the privilege was cited as the reason the department did not tell Congress about some memos in a high-profile environmental case.

And Clinton's attorney general, Janet Reno, advised Clinton in 1999 that he could invoke the privilege to keep from disclosing documents detailing department views on 16 pardon cases.