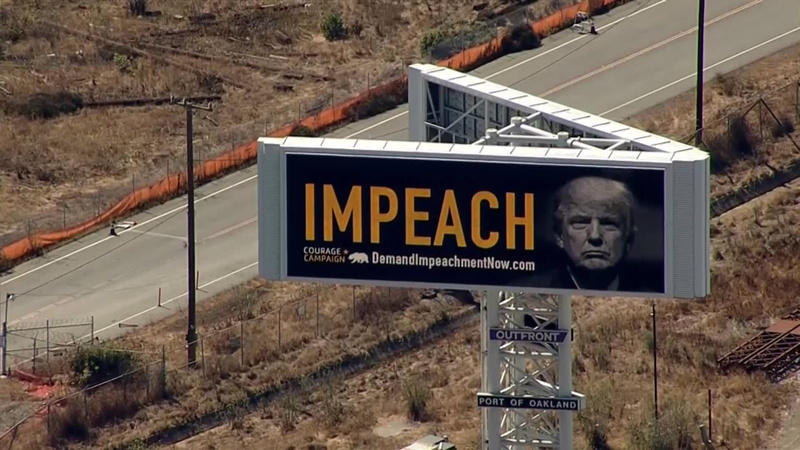 CBS San Francisco reports a billboard that calls for the impeachment of President Trump was constructed along the roadway.

The digital ad bears a giant photo of a brooding Mr. Trump with the word "Impeach" in huge yellow letters. It also has a URL for an online petition.

The billboard is the work of a group called the Courage Campaign, whose president says it's time to get the country behind the removal of Mr. Trump. They want to pressure the Republican-controlled Congress, which has shown no inclination to impeach the president.

"We are a grassroots organization. If we are not calling for impeachment, given what has happened, who is?" asked the organization's president and executive director, Eddie Kurtz.

He points out that more than a million people cross the bridge every day, so it's an incredibly strategic place to have a billboard.

Courage Campaign is a progressive organization, probably best known for fighting Proposition 8, the ballot initiative that banned same-sex marriage in California in 2008. Its website says it focuses on economic justice, human rights and corporate and political accountability.

"There's this pattern that seems to repeat: Trump does something absolutely unacceptable, unethical, just the thing you could never imagine even the worst of our previous presidents doing," Kurtz said. "There's this wave of outrage -- it happened after Charlottesville, it happened even before he was elected when he admitted to sexually assaulting women -- and then it settles down and his base is still with him."

Saint Mary's College political professor Steve Woolpert says it's unlikely that Mr. Trump would be impeached without some finding of significant legal wrongdoing. But, then again, just getting elected was something that few people expected to happen.

"This is an unusual moment," Woolpert said. "It's fraught with both opportunity and peril, largely because so many people didn't see it coming."

Kurtz says the campaign is spending $1,500 for the billboard and that its online petition was already nearing 100,000 signatures.

"It really is going to take an overwhelming of political energy, of grassroots energy, to demand impeachment, as well as having a legal case," he said. "So our piece of the fight is to mobilize and educate grassroots progressives about the case for impeachment."

Kurtz isn't worried about distracting drivers. He says the ad falls within the Bay Bridge billboard guidelines. He says with every new outrageous statement by the president, the petition drive wins more support.

The billboard will stay up through Sunday and perhaps longer if there are enough donations.