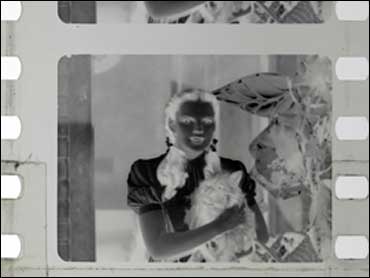 While Scarlett O'Hara stayed cool at home, Dorothy Gale took a year out to go skipping down a digital yellow brick road in a Hollywood film lab.

The recently-reunited Technicolor duo could well be spending much of the rest of the millennium killing time with Lassie, Annie Oakley, Tarzan and a canned colony of heroes and villains from the silent-film era.

Thousands of pre-1951 movies captured on volatile nitrate film are kept in frigid, low-humidity vaults in a modest cinderblock building owned by the George Eastman House Museum on the piney outskirts of Rochester. Cold storage saves them from rotting away within a lifetime or, worse yet, burning up.

In most cases, these are original camera negatives from the first half-century of motion pictures, classics such as "The Wizard of Oz" and "Gone With the Wind," the silent era's top-grossing "Big Parade," Lon Chaney in "The Phantom of the Opera" and Cecil B. DeMille's 1923 version of "The Ten Commandments."

While even the best-kept vintage reels are starting to buckle with age, a beloved movie's master negative is a sacred object that would cost untold millions to replace.

Much of that value lies in its power to produce the finest-quality copies, be it on 35mm film, Blu-ray DVD or some dazzling format that pops up in, say, the early 26th century.

"I really hope that 500 years from now people can still look at this because it's wonderful stuff," Deborah Stoiber, vault manager at Eastman's Louis B. Mayer Conservation Center, said during an inspection of one of 12 dark vaults kept refrigerated year-round at 40 degrees Fahrenheit and 30 percent humidity.

On the shelves of this climate-controlled celluloid nursing home are prized Technicolor films such as "Meet Me in St. Louis" and "Little Women"; silent gems starring Mary Pickford and Greta Garbo; a Lumiere brothers' chronicle of President McKinley's inauguration parade in 1897; and "Olympia," a Nazi propaganda feature on the 1936 Berlin Olympics shot by Adolf Hitler's filmmaker, Leni Riefenstahl.

The magical way in which a chilly, dry setting retards shrinking, fading or "nitric melt" inevitably raises concern about the long-term survival of other vulnerable pieces of the world's film heritage, from safety-based acetate stock adopted in the 1950s to television recordings to flimsy digital-video cassettes.

A Look At Preserving Classic Films

"Nitrate is turning out to be a historically durable medium that, if stored properly, rivals paper - and well-made paper - as a storage medium for image and sound," said Patrick Loughney, motion-picture curator at Eastman, the world's oldest museum of photography and film.

Its out-of-the-way bunker is one of just a handful of nitrate repositories run by major film archives around the country. It isn't listed in phone books or open to the public. Nor does the plain, single-story building draw the eye on a road where the occasional home is backed by woods or farmland.

On the shelves are 6,600 titles, or 22,836 reels - the oldest surviving negatives or prints dating to the dawn of moving pictures in 1893. The Rochester Institute of Technology's Image Permanence Institute estimates that climate control can preserve films still in pristine shape for another 800 to 900 years.

Considering how a nitrate fire blinded Alfredo, the projectionist in "Cinema Paradiso," each vault is rigged with sprinklers and blowout doors.

"Nitrate burns at 16,000-to-17,000 feet per second, dynamite at 24,000-to-25,000 feet," Loughney said. "It has that disturbing quality of producing its own oxygen, so you can't put it out with water. If properly stored and handled, then it's no more dangerous that any other kind of hazardous substance, like gasoline."

That knowledge came the hard way. Made primarily from sulfuric acid and cotton, nitrocellulose was blamed for disastrous warehouse and theater fires, chiefly in the two decades after Rochester-based Eastman Kodak Co. adapted it from flexible roll film it pioneered in 1889.

Nitrate film was heavily recycled for its high silver content. But the main reason some 90 percent of U.S. holdings has vanished is neglect. In severe cases of exposure to heat, damp and temperature swings, scenes become obscured by a psychedelic collage of bubbles, swirls and flashes of light.

Library of Congress vaults contain half of the estimated 300 million feet of nitrate film in U.S. storage. The Film & Television Archive at the University of California, Los Angeles, is next with about 80 million feet.

Among Eastman's 28 million feet are DeMille's silent-film collection, an early Lumiere film featuring monks walking up a hill in Indochina in 1894 and Garbo in "Flesh and the Devil," made in 1926. Stoiber's personal favorite is "When Flowerland Awakens in Japan," a stenciled short film from 1912.

"It doesn't matter if it's 'Wizard of Oz' or an obscure newsreel that's incomplete and unidentified, they're all treated the same way - as a historic artifact," she said.

A California native who keeps a winter coat at the office, Stoiber gets through examining the entire collection every few years. One telltale sign a film is starting to decompose: "It smells like wet dog."

Gently unwinding the cyan negative of "Gone With the Wind" through her fingers - the Technicolor system required scenes to be recorded simultaneously in yellow, cyan and magenta - she pointed out an original splice in which Rhett - on his knees - proposes to Scarlett, whose second husband has just died.

"See this warping, how it curls a little?" Loughney interjected. "That's an early, early stage of deterioration" in a celebrated 69-year-old movie "not very well stored in the first 50 years of its life."

The chilled-vault solution began gaining traction among film custodians in the 1970s and storage centers have sprouted in the last 20 years, most recently at UCLA and the Library of Congress.

One unavoidable trade-off that shortens a popular film's life expectancy is when its corporate owner, encountering the latest technology, borrows it back for reformatting. "The Wizard of Oz" returned in March after undergoing a special-edition DVD makeover, just as "Gone With the Wind" did from 2002 to 2004.

Interest in nitrate films has ballooned of late "because in the age of video, the DVD and the Internet, a corporate liability that was expensive to store got converted back into a corporate asset," Loughney said.

One of Daniel Wagner's yearlong projects as a preservation officer at Eastman is using digital technology to remove dust and scratches and restore missing chunks of "Attack of the Indians," an 8-minute film shot in 1911 by Native American filmmaker James Youngdeer.

Only four of Youngdeer's 120 movies are known to survive, and this one - scanned back onto 35mm film - will someday show up in screenings around the world, starting at Eastman's Dryden Theater.

"When I started my career 30 years ago, it was taken for granted that films like this would never be recovered," Loughney said.

Finding old movies sometimes involves global detective work, with long-lost negatives turning up in places such as Russia and China where they didn't get thrown away so often. Old or new, however, many titles await expert intervention.

"We have a lot of films that won't be got to in my lifetime, but that's OK," Loughney said. "We keep them alive for another 50 years before somebody else raises the money. The most effective preservation strategy is cold storage because it buys you time."