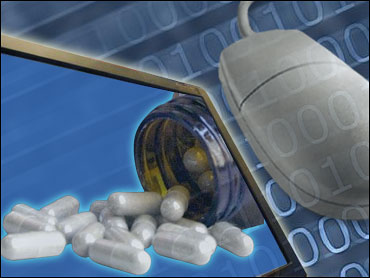 A new report details how easy it is to buy prescription drugs - without a prescription. All you need is a computer. The report by researchers at Columbia University says 85 percent of Web sites that sell those drugs do not require a prescription. As CBS News correspondent John Blackstone reports, this means almost anyone can get them, including children.


As an addiction therapist working with kids, Larry Fritzlan has seen plenty of pills. But he was shocked by the supply one patient turned in to flush down the drain.

"He brought in so many I thought we maybe we would screw up the local sewer system," said Fritzlan. "He brought ... it was a large brown envelope and I'm guessing there were a couple thousand pills."

All bought on the Internet. A study released today shows how the Internet has become an uncontrolled marketplace for what are supposed to be tightly controlled drugs like pain killers and tranquilizers.

The study found 159 different Web sites offering controlled drugs for sale, but only two of those were certified as legitimate Internet pharmacies. The remaining 157 were called "rogue sites".

"It's despicable," said Linda Surks, whose son, Jason, was killed by an overdose of the anxiety medication Xanax in 2003. "It's really - it's such a huge problem."

"He was really a fabulous person who made a horrible mistake," Surks said.

Jason got the drug on the Internet with no prescription.

"He had ordered Xanax from a Mexican pharmacy online," Surks said.

That was five years ago. But in spite of efforts to crack down on Internet drug sales, if you do an online search for Xanax today, the very first thing that pops up is an ad for the drug - no prescription required.

And those who treat addiction say the young are particularly at risk because of what's online.

"Often they have credit cards, they certainly are the most in tune with the Internet," said Dr. Jeffery Wilkins of Cedars Sinai Hospital.

It provides a temptation some have paid for with their lives.