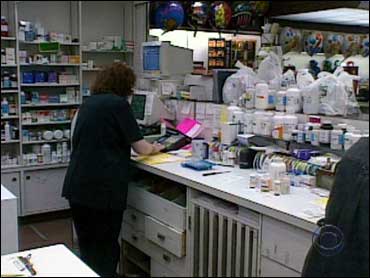 The idea: allow some prescription drugs to be sold without a prescription, provided pharmacists like Cheri Garvin, the CEO of Leesburg Pharmacy, who CBS News transportation and consumer safety correspondent Nancy Cordes spoke with, perform a quick consultation.

"I would say it's medications that are fairly safe," Garvin said. "They have a good safety profile, but could be more effective and safer if there is an interaction with a pharmacist."

The idea is in such early stages the FDA hasn't even said which drugs would fall into this new category.

And though behind-the-counter drugs exist in Europe, some doctors here are skeptical.

"Pharmacists simply do not have the necessary education and training to perform these clinical functions," said Joseph Cranston of the American Medical Association.

"We need much more evidence from places that have had this program for a long time before embarking on it in the United States," Wolfe said.

But pharmacists in Britain say the system saves time.

"It's easier for the patient if they run out of their medicine," U.K. pharmacist Thamer Auf said.

And Garvin argues it's just an extension of what she's doing already.

Still there are many unanswered questions. Would "behind-the-counter" drugs be covered by insurance? Would pharmacists get paid more?

Most importantly, does Congress even want to bother creating an entirely new class of drugs?