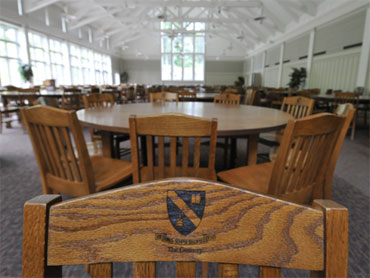 HARTFORD, Conn. (AP) The former dean of an exclusive boarding school has been charged with molesting three students, leading to a lawsuit, fears about additional victims and damage to the sterling reputation of the 159-year-old school.

The family of one student at The Gunnery sued last week over what it says were "repeated" abuses by former dean Richard Reinhardt, who was fired two months ago. Reinhardt, 44, was arraigned last week on charges including sexual assault and risk of injury to minors.

Police have accused Reinhardt, of Telford, Pa., of molesting the three, but a Superior Court judge has sealed files detailing the allegations. Prosecutors have asked that they remain so because the investigation continues.

The family's lawsuit seeks unspecified damages from Reinhardt, the school, Head of School Susan Graham and teacher Dana Jackson, who supervised the dorm in which the boy lived.

It alleges that the assaults began in October 2007, a month after the 14-year-old boy arrived at the school, and continued "repeatedly" until his parents pulled him out of school the following May.

The boy's attorney, Robert Reardon, said Reinhardt took the unidentified student out of his dorm to spend nights in the dean's campus apartment, where the abuse took place. The Associated Press generally does not name people alleging sexual assault.

Reardon says he believes more students may have been abused.

"We all know that people that engage in this sort of behavior are known to do it repetitively, and there are already at least two other victims who have come forward," Reardon said.

Susan Smith, attorney for one of the other two students, said she plans to file a similar lawsuit this week.

Reinhardt had been a member of the faculty at The Gunnery since 1996 and was named dean in 2006. He also served as a dorm parent and coached the school's crew team.

His attorney, William Dow III, said Reinhardt had a spotless reputation and plans to fight the allegations, which could put him in prison for as many as 60 years upon conviction.

"We have been overwhelmed with supporters for Rob Reinhardt," Dow said. "He will plead not guilty when he appears in court on Sept. 1 and will continue to deny the civil allegations, which are identical."

Messages left at The Gunnery for Graham and Jackson went unanswered. Graham issued a statement after Reinhardt was arrested saying the school reported the matter to authorities when it learned of the allegations in June and was taking the matter seriously.

"The safety and well-being of our students has always been our top priority," she said.

The school, in the rolling hills of western Connecticut, was founded in 1850 by outdoorsman and abolitionist Frederick William Gunn. More than 300 students were enrolled last year, and 73 percent of them lived on campus, where tuition, room and board runs more than $42,000 per year.

Alumni and area residents expressed shock Thursday about the scandal at the school, which prepares its students for the Ivy League.

"He's put a lot of himself into that school. It was his life," said Leila Klein, a resident of Washington, Conn., where the school is located. "I was stunned and upset for him when I heard. I hope he gets through this, and I certainly hope it isn't true."

Glenn Radman was doing landscaping work in nearby Washington Depot on Thursday and called the scandal "a slap in the face for the community."

"You've got to figure this guy's life is over, but I don't think there's going to be an acquittal in this case because it's not just one kid, it's two or three," he said.

Maria Mabee Mason, who in the late 1960s attended Wykeham Rise, a nearby girls school that was affiliated with The Gunnery, worries how the scandal will affect the school's reputation.

"I think any negative publicity, in a downturn of our economy, when you have a school that is as elite as this and you're choosing between Taft, Hotchkiss, and some of the others, and then there is Gunnery, I think that any negative stain on a school is bad."