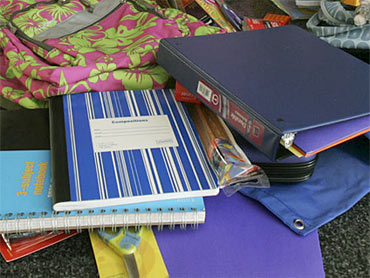 Despite medical advances in fetal and neonatal care, the number of babies born prematurely has been rising steadily since 1981.

Since premature babies usually have less developed organs than full-term babies, they may face serious and multiple health problems, ranging from cerebral palsy and mental retardation to blindness.

Justin Washington was born November 13, 1994, weighing 1 pound, 8 ounces. He was so small he actually could fit in the palm of your hand.

Delivered at only 24 weeks doctors told his mother Dorenda he had a 25 percent chance of survival.

"The first time I saw him I thought he looked like a baby bird; he had no fatty tissue, his skin was transparent, you could see the bones, the veins, everything," Dorenda Washington said.

For four months he struggled in the hospital, attached to beepers and monitors and dependent on oxygen. All the while his frightened and guilt ridden parents wondered what went wrong.

According to the National Center for Health Statistics, more than 476,000 babies, or nearly 12 percent of live births in the U.S. in 2001, were born before 37 completed weeks. That's an increase of 27 percent since 1981, reports CBS News Medical Correspondent Elizabeth Kaledin.

As a result, the March of Dimes is launching a $75 million, five-year national campaign to make the public aware of the growing problem and to reduce the number of premature births.

A recent March of Dimes national survey of 1,967adults found that 65 percent of them were unaware of this problem. Only 35 percent of them thought prematurity was "very serious" or "extremely serious."

"Science has not been able to tell us why women go into preterm labor," said Dr. Jennifer Howse of the March of Dimes Foundation.

"Most parents don't know that the baby is going to be born premature," says Howse. So with the Prematurity Campaign, the aim is to increase public awareness to at least 60 percent and decrease the rate of preterm births by at least 15 percent.

The following are risks for preterm labor:

Also the NCHS study found that the rate of premature birth vary by race and ethnicity with black women among the highest racial/ethnic subgroups to give birth prematurely.

The money for this campaign comes from public support from communities and individuals. It will be used to support existing March of Dimes programs, research and community grants and a pilot program for parents.

Dr. Howse says the nation's hospital bill for prematurity is estimated at $11.9 billion a year. "This problem is very expensive, in addition to the personal heartbreak and the learning disability that it can cause."

Considering his size at birth, Justin Washington was relatively lucky: he looks like a healthy 8-year-old boy. But his mother says, "He's not fine today. He has vision problems. We're having problems in school with learning disabilities. It's not okay."

He survived his rocky debut, but being born too early could slow down Justin and thousands like him, for the rest of his life unless medicine speeds up research into the puzzle of pre-maturity.

The following are signs and symptoms of premature labor:

You may also visit their Web site at www.marchofdimes.com or in Spanish: www.nacersano.org.