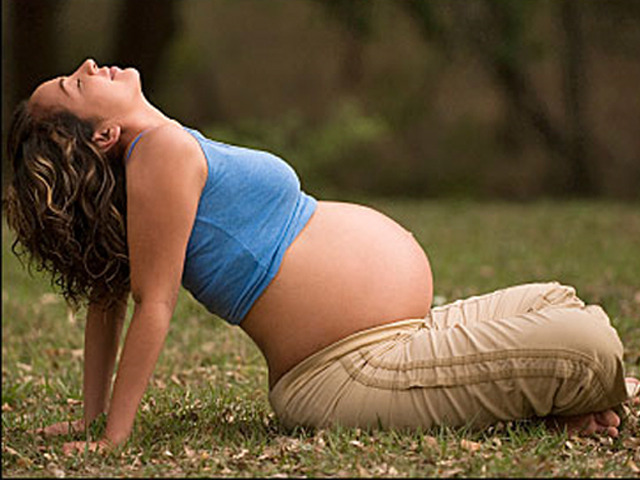 Some women get so obsessed with keeping their weight in check while pregnant that they go overboard on dieting and exercise and put their baby's health at some risk, experts say.

And some of those women may get started on the path to "pregorexia" by images of celebrities who look thin while pregnant and immediately after giving birth, observers agree.

On The Early Show Monday, Dr. Holly Phillips said women cross the line into pregorexia "when they start to change their behaviors and really focus only on that number on the scale, only on their weight. That's when it gets dangerous. ... Everything you do during pregnancy, including your diet and exercise, should be for your health not for your weight."

Phillips noted that, "Calorie restriction is linked with growth retardation (and) birth defects, and (with) vitamin deficiencies, both for the mother and baby. What's interesting about vitamin deficiencies is, say, for instance, with calcium deficiency: The baby will probably get what he or she needs, but that'll be at the expense of the mother's bones. So, you really have to be careful with that" and take in more calories overall than you ordinarily would.

Mother's of average weight are advised to gain 25-35 pounds during pregnancy, Phillips adds. If you're overweight, you should aim for the lower end of that range, and if you're underweight before pregnancy you, should gain between 28-40 pounds. Moms of twins my gain 45 or more.

Exercise can also become a matter of too much of a good thing for expectant mothers.

There are many benefits of exercise during pregnancy, Phillips pointed out, "from the mother's mental and physical health to better deliveries, better postpartum recoveries, even a higher I.Q. for the baby.

"But, you don't want to overdo it. You never want to exercise to the point where ... you're not getting enough oxygen, because that's linked with neurological defects in the baby.

"You shouldn't exercise to the point of exhaustion. If you need to throw yourself on the couch afterwards just to rejuvenate, you've done too much. You should feel invigorated after your workout, not exhausted."

The right amount of exercise should be determined by you and your doctor's office, Phillips says, and should be based on your pre-pregnancy level of cardiovascular conditioning. Specifically, if you were a tri-athlete before becoming pregnant, your pregnancy workout will naturally be more vigorous than the mom who may have been more prone to being a couch potato pre-pregnancy.

But 30 minutes of moderate cardiovascular activity four days-a-week is the minimum.

Asked by co-anchor Maggie Rodriguez whether pregorexia may be spurred, at least in part, by images of slim, pregnant celebrities, just as many teen sufferers of the eating disorder anorexia are influenced by images of skinny celebrities, Phillips replied, "I think we've never before been more kind of obsessed with celebrity culture, and with celebrity pregnancies, as well. It's not unusual to see pictures of these celebrities the day before and the day after birth and they're looking super-humanly fit. They're really incredible.

"But you also have to remember a lot of these celebrities are just genetically blessed. ... They have the best dieticians, nutritionists, (trainers), etc. They certainly have an advantage."

What's more, Phillips continues, it's wonderful that pregnant women now have designer styles to choose from, especially those that celebrate and compliment the pregnant shape. It only becomes a problem when women become unhealthily fixated on remaining a specific size.