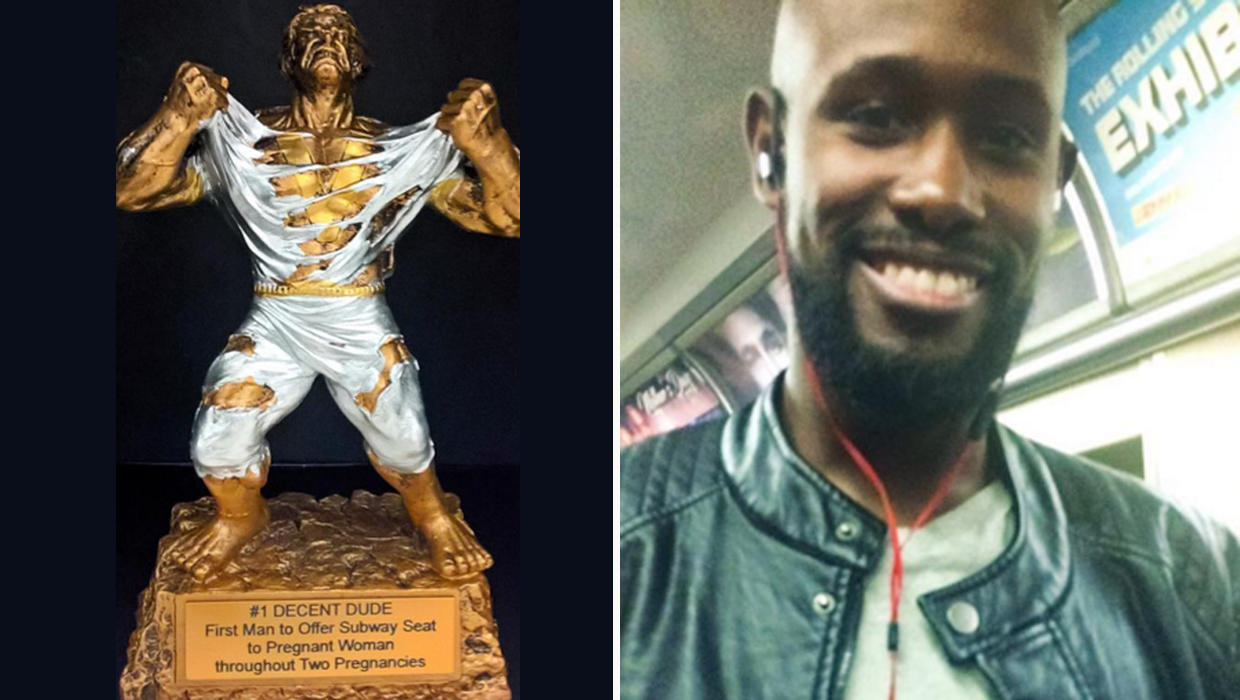 At eight months pregnant, Ivonne Lin longed for the day a man would finally offer her a seat on a New York City subway.

During her first pregnancy, a little more than two years ago, the 38-year-old said she didn’t get a “single subway seat” offered to her by a man -- only women gave up their seats.

“I even started carrying around a card with me to hand to the first man who would be the first to offer his seat,” Lin told CBS News. “I was kind of disappointed by the fact that I never got to give it away.”

Recently, as she entered the third trimester of her second pregnancy, Lin was playing the waiting game once again. The Manhattan resident knew she had reached the point where no one could fail to notice her baby bump.

So she started to tally all the times men looked past her on the subway. And as she commuted home from work one day, she came up with the idea to create a customized trophy she called the “Decent Dude” award.

“There was such a long build up to this point, I knew I needed something bigger,” Lin explained. “I like giving people trophies.”

For two months, Lin carried around the 7-inch trophy in her backpack, waiting for the chance to surprise a kind stranger. Last week, during rush hour, she was finally able to do just that.

While traveling home from work on an uptown A train, Lin stood near a man who was sitting with his headphones on, playing a game on his smartphone. After two stops, he looked up from his seat and spotted Lin standing across from him.

The man jumped up and apologized for not offering his seat sooner. Before she sat down, Lin told the man to “wait” and pulled the golden statue from her bag.

“He just really looked like a really nice guy,” Lin said. “I was shocked, but as a New Yorker you sort of develop a sixth sense on who would be a nice guy. He radiated that.”

The man, who was later identified as Ricky Barksdale of Harlem, couldn’t help but chuckle.

“I have two kids of my own,” Barksdale, an actor and martial artist, told CBS News. “I didn’t think anything of it, but here we are.”

Lin posted a photo of Barksdale with his trophy on Instagram and word of his “heroism” soon traveled throughout the city.

“It was a cool gesture,” Barksdale said about the trophy. “Things like that don’t happen in New York City. I felt like I was just doing a decent thing as a human being.”

He said he was happy to help restore Lin’s faith in men, and hopes others will follow his lead.

“Just be a decent person and do the right thing,” Barksdale said. “I’m no angel. I’m not perfect, but little things like that can go a long way.”