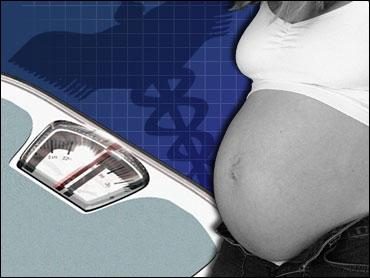 The standard advice for how much weight a woman should gain during pregnancy may need to be changed, concludes a rigorous and provocative study suggesting that even accepted weight gains may raise the risk of having an overweight toddler.

Women in the study who gained the recommended amount of weight ran four times the risk of having a child who was overweight at age 3, compared to women who gained less than the advised amount.

The outcome was about the same for women who gained more than the advisable amount.

So what is a pregnant woman to do? Clearly, she should not gain more weight than recommended, said the study's lead author, Dr. Emily Oken of Harvard Medical School.

But beyond that, it is too early to say whether women should try to gain less than the standards call for or shoot for the low end of the recommended range, Oken said. At least the latter course is probably safe, she said.

Some other experts urged that pregnant women not try to gain less weight than recommended.

In any case, Oken said, it is too soon to call for a revision of the standard guidelines.

The study appears in the April issue of the American Journal of Obstetrics & Gynecology. It focuses on guidelines issued in 1990 by the Institute of Medicine, a private non-governmental organization that advises the federal government.

The guidelines recommend differing amounts of weight gain depending on how much a woman weighed before pregnancy, as measured by a combination of her height and weight called the body-mass index.

Those with a "normal" BMI are encouraged to gain 25 to 35 pounds (11 to 16 kilograms), for example. Women with a higher BMI, meaning they are heavier at a given height, get lower targets, while women with a lower BMI are given a higher range.

The new work looked at 1,044 pairs of mothers and their 3-year-olds. It compared how much weight the mother had gained during pregnancy with the BMI of their children. It defined "overweight" in the 3-year-olds as having a body-mass index greater than 95 percent of children of the same age and sex.

Researchers found that about half the mothers gained more weight during pregnancy than the guidelines called for, while about a third met the recommended gain. The remaining 14 percent gained less weight than recommended.

Oken said it is not clear why greater weight gain in the mother would raise the risk that her toddler would be overweight. She noted that women who have diabetes during pregnancy tend to produce bigger babies who run a heightened risk of becoming overweight later in life. That suggests some factor in the womb can affect a baby's future, she said.

Analysis suggested that sharing of poor health habits between mother and child does not account for the outcome, she said. And while the women in the study generally had health insurance and were well-educated, studies of other groups are finding similar results, she said.

But gaining too little weight in pregnancy raises the risk of having a low-birthweight baby, which poses a hazard to the child.

So figuring out the proper weight gain is a balancing act, she said.

Dr. Jennifer Wu, an obstetrician-gynecologist at Lenox Hill Hospital in New York who was not involved in the study, noted that many women are obese even before getting pregnant.

The new work suggests that no matter their starting weight, pregnant women may need to aim for the lower end of their recommended weight gains "for their own well-being and the further well-being of the child," she said.

Lisa Bodner, an assistant professor of epidemiology and obstetrics-gynecology at the University of Pittsburgh Graduate School of Public Health, says the new work adds to previous indications that the IOM guidelines may need to be revised. Bodner, who didn't participate in the new study, called it one of the most rigorous to address the question.

"We know that weight gain is important, we just have to find a middle ground" between too little and too much, she said.