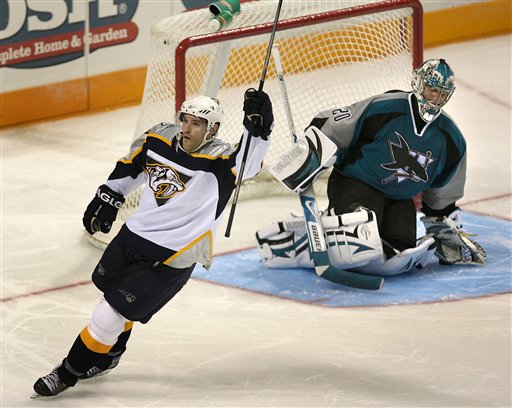 The Ottawa Senators are making a late push to secure home-ice advantage in the first round of the playoffs. The Nashville Predators have grander aspirations. They're trying to make sure the road to the Stanley Cup goes through Music City for the first time.

The Senators won for the eighth time in nine games as Ray Emery made 27 saves in a 2-0 victory over the Carolina Hurricanes on Wednesday night.

Jason Spezza put the Senators up by two 4:41 into the third period and assisted on Dany Heatley's team-leading 38th goal in the first. The Senators completed a home-and-home sweep of the defending Stanley Cup champions and became the third Eastern Conference team to reach 80 points. They also improved their hold on fourth place in the conference by moving five points ahead of Pittsburgh.

"It's so tight," said Senators captain Daniel Alfredsson, who rejoined Heatley and Spezza on Ottawa's top line. "We're looking at fourth place and home-ice advantage, but at the same time, we've got to make the playoffs, first and foremost. To do that we've got to keep winning and building up distance winning games like this."

The Predators went to a shootout to beat the San Jose Sharks and newly acquired forward Bill Guerin. J.P. Dumont scored in the fourth round of the shootout to end Nashville's 4-3 victory.

Nashville regained the NHL lead in points with 90, two in front of Central Division rival Detroit, by erasing an early San Jose lead. The Sharks were up 2-1 after the first period.

"It's always been hard for us to come back when we're behind, and I challenged them to pull it off tonight," Nashville coach Barry Trotz said. "They really stepped up. It's a real character-builder. The veterans came forth. ... If you can get through the first period here, you have a chance. You have to weather their scoring and their attacks on you."

In Wednesday night's other NHL game, Calgary beat Minnesota 2-1 in a shootout.

In Ottawa, Emery earned his fifth shutout of the season and eighth of his career. His best save came late in the third period on a Carolina power play, diving across the goal to make a glove save against Justin Williams.

"It's been a while since I've had a normal game," said Emery, who was ejected last Thursday from the first of two feisty games against Buffalo after he returned from a three-game league suspension. "I felt a bit awkward, even tonight. I wasn't feeling totally confident, but towards the end I started seeing the puck better and it was a great game for me to get my feet back under me as the team continues to improve while heading into the playoffs."

The Senators won 4-2 at Carolina on Tuesday behind backup and former Hurricanes goalie Martin Gerber after claiming three of a possible four points in consecutive games against East leader Buffalo.

"Back to back is always tough, especially against the same team," Spezza said. "It was a pretty up-tempo game last game and both teams got in late, but the intensity was there. They're not the most physical team so it wasn't as physical as maybe the Buffalo games, but they were still tough games and we were both tired teams, definitely."

In San Jose, Tomas Vokoun made 27 saves for Nashville and stopped three of four shootout attempts to remain unbeaten in his last six starts against the Sharks. Alexander Radulov scored in the third period and again in the shootout as the Predators earned their league-best 43rd victory.

Guerin, acquired Tuesday from St. Louis in a deadline deal to add toughness and experience to a young team, wore No. 13 and looked active as the left wing on a line with MVP Joe Thornton and Jonathan Cheechoo. But Nashville kept that All-Star line off the scoreboard, just one component in a confidence-building victory.

"I feel comfortable (already)," said Guerin, who has played right wing for all but one season of his 14-year NHL career. "I didn't have my best game, but I lik the way our team played. We've got a lot of talent. It was an adjustment playing on the left, but that takes time."

The Sharks don't have much time to avoid another second-tier playoff finish. Evgeni Nabokov made 28 saves for San Jose and forced the shootout with a stunning glove save on Paul Kariya with a second left in overtime, but the Sharks still lost for the sixth time in eight games.

Jarome Iginla scored to give the host Flames their first shootout victory of the season.

Robyn Regehr scored at 15:29 of the third period to tie the game for Calgary, which is an NHL-best 27-6-1 at home, including a 13-1-1 mark over their last 15 games at the Pengrowth Saddledome.

Pavol Demitra scored his 19th of the season for Minnesota, which began a key three-game road trip against Northwest Division opponents.