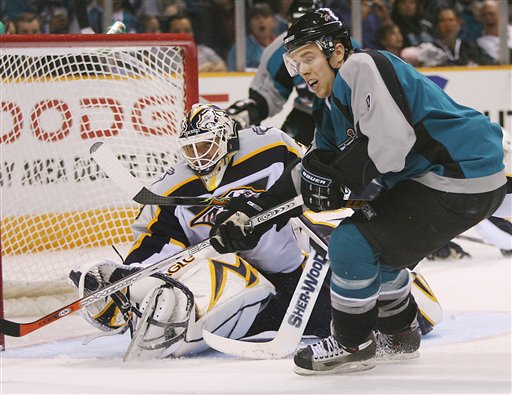 Bill Guerin saw plenty of reasons to be excited about his late-season trade to the San Jose Sharks. He also saw why the Nashville Predators might be the team to beat this spring.

J.P. Dumont scored in the fourth round of the shootout to end the Predators' 4-3 victory Wednesday night, spoiling Guerin's debut in teal.

Tomas Vokoun made 27 saves and stopped three of the Sharks' four shootout attempts to remain unbeaten in his last six starts against San Jose. Alexander Radulov scored in the third period and again in the shootout as the Predators earned their league-best 43rd victory.

Guerin, acquired Tuesday from St. Louis in a deadline deal to add toughness and experience to a young team, wore No. 13 and looked active as the left wing on a line with MVP Joe Thornton and Jonathan Cheechoo. But Nashville kept that big-name line off the scoreboard _ just one component in a confidence-building victory.

"I feel comfortable (already)," said Guerin, who has played right wing for all but one season of his 14-year NHL career. "I didn't have my best game, but I like the way our team played. We've got a lot of talent. It was an adjustment playing on the left, but that takes time."

The Sharks don't have much time to avoid another second-tier playoff finish. Evgeni Nabokov made 28 saves for San Jose and forced the shootout with a stunning glove save on Paul Kariya with a second left in overtime, but the Sharks still lost for the sixth time in eight games.

After Martin Erat and Radulov scored power-play goals in the third period to put Nashville ahead 3-2, rookie Sharks defenseman Marc-Edouard Vlasic tied it with a wrist shot through traffic with 4:08 left in regulation.

But Nashville coach Barry Trotz saw only positives in his club's comeback in a difficult road arena.

"It's always been hard for us to come back when we're behind, and I challenged them to pull it off tonight," Trotz said. "They really stepped up. It's a real character-builder. The veterans came forth. ... If you can get through the first period here, you have a chance. You have to weather their scoring and their attacks on you."

"We took some really bad penalties, reaching out with our stick," Wilson said. "We got ourselves into a little bit of penalty trouble, and that's really the only time (the Predators) were dangerous."

San Jose acquired Guerin and defenseman Craig Rivet, who still hasn't played for San Jose since Sunday's trade with Montreal, to add a veteran presence to a team sorely lacking in experience. Nashville did the same two weeks ago by picking up Peter Forsberg from Philadelphia.

Bernier, who hadn't scored in his first four games since returning from the minors and an injury, beat Vokoun on the power play midway through the first period. Carle, who also served a stint in the AHL this season, added another power-play goal late in the first.

"(In) the first period, they just kept coming after us," Vokoun said. "We started to skate and made them play more of a zone game. We have to win some games when we're behind, and this was a real big thing for us to do. We were challenged, and we had to step up."

Nabokov stopped a penalty shot by Erat in the second period, but the Czech forward tied it with a snappy wrist shot during a power play with 13:31 to play. Forsberg picked up the second assist, his third point in six games with Nashville.

Radulov then tipped home Shea Weber's shot from the point with 5:07 to play, but Vlasic fired a shot over Vokoun's glove just 59 seconds later.

San Jose had a power play in the final 3 minutes of rgulation, but couldn't score. Christian Ehrhoff took a hooking penalty with 39 seconds left in overtime, but Nabokov gloved Kariya's one-timer and rolled onto his back with 1 second left, forcing the shootout.

Notes:@ Sharks D Rob Davison thought he had scored his first goal of the season early in the second period, but the officials instead called a delay-of-game penalty on Vokoun for knocking the net off its moorings moments earlier. Sharks coach Ron Wilson wanted the goal to count because play continued while the net was askew. ... Marleau has an upper-body injury, and Hannan has a lower-body injury.