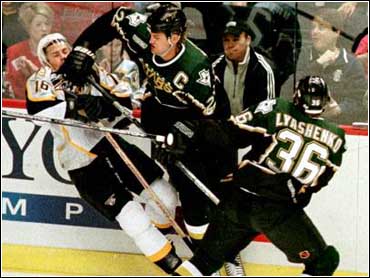 The Dallas Stars knew what to expect from the Nashville Predators. They talked about it and planned for it, and it still didn't help the Stanley Cup champions.

Cliff Ronning scored 26 seconds into the game Monday night, and Nashville never lost the lead in beating the Stars 5-2 to snap a six-game losing skid.

"We thought we had prepared for that," said Stars left wing Brenden Morrow, who got Dallas' first goal. "But it kind of took the wind out of our sails when they scored."

Ville Peltonen scored a goal and added an assist and Tomas Vokoun stopped 23 shots as the Predators avoided matching their franchise-high for consecutive losses to split the season series at 2-2.

Nashville hadn't scored more than two goals in a game since Feb. 2, also the last time it won a game. Ronning, not invited to the All-Star game earlier this month, set the tone when he scored his 21st goal off a rebound of David Legwand's missed backhander.

The Stanley Cup champions, who beat Colorado 2-1 at Denver on Sunday, looked tired. The Stars couldn't get any offense going and had only five shots in the first period.

Manny Fernandez shut out the Predators last week and had been giving up just a league-best 1.74 goals per game. But he allowed two goals within the first nine minutes as Vitali Yachmenev scored his 12th at 8:49. Fernandez gave up the most goals scored against Dallas since Dec. 23.

Nashville coach Barry Trotz sai the early lead was crucial since Dallas had given up five goals only nine times this season. He started Ronning's line instead of sending him out second or third, trying to avoid the physical Guy Carbonneau.

"It made that difference," Ronning said.

Dallas pulled within 2-1 4:10 into the second when Morrow backhanded the puck in off Sylvain Cote's pass from the slot on a power play.

Nashville answered 33 seconds later when Kimmo Timonen got his eighth goal off an assist from Peltonen and Sebastien Bordeleau. It got so bad for the Stars that Vokoun got an assist at 14:53 on Peltonen's goal for a 4-1 lead.

Dallas came alive in the third and finished the game outshooting Nashville 25-22. Carbonneau got his eighth goal on a backhander at 1:53, but that was it as Vokoun had several big saves, including a glove stop off Richard Matvichuk with five minutes left.

"Tomas came up big," Predators captain Tom Fitzgerald said. "We knew they were going to come out strong, and we weathered it. It was nice to see that goal at the end just nice to come in here and win, listen to the music and see everybody smiling for once."

Stars center Mike Modano, who got only one shot in 22 minutes before spending the final four minutes in the penalty box, called Timonen's goal the backbreaker. None of the Stars were happy with their power play, which produced just one goal on four tries and just about as many shots.

"The power play has been an area of the game that's been a frustrating and real sensitive subject," Modano said. "But we've been winning and when you're winning, you don't bring up those things."

Patric Kjellberg tied Ronning for the team lead in goals when he scored a power-play goal into an empty net with 1:01 to go.

The only bright side for Dallas was Brett Hull. He had an assist on Morrow's goal, giving him 100 points in his 118 games since joining the Stars before last season.

Only 15,444 fans showed up, the worst crowd for the second-year franchise since Oct. 14.