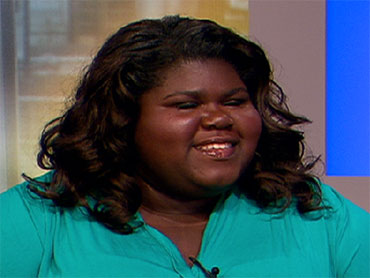 Actress Gabourey "Gabby" Sidibe says she's "a normal girl, trying to do abnormal things," but that may be the understatement of the year.

Among a plethora of nominations, Sidibe has received a best actress Academy Award nomination for her first acting job in "Precious: Based on the Novel Push by Sapphire."

Sidibe, who says she's now "busy all the time," said being nominated is a "weird head space to be in."

With just 11 days until the Oscars, Sidibe told "Early Show" co-anchor Maggie Rodriguez, everyone's counting down harder than she is. "I'm not nervous at all," she said. "It's just a day."

Review:Oscar-Worthy Performances
The Unlikely Story of "Precious"
Sapphire: from "Push" to "Precious"

But what does the "Precious" star think about her chances against some of Hollywood's heavy-hitters in the best actress category? Sidibe's up against Sandra Bullock, Helen Mirren, Carey Mulligan and Meryl Streep.

"I've been referred to as 'the dark horse' of the category, and that's cool," Sidibe said. "I'm just really excited to be there. I feel like everyone else is just saying that they're excited to be nominated, and I really am."

However, Sidibe is even more excited about the Oscar fashion she's going to sport on the red carpet. She says she tried on her dress for the first time Tuesday.

"It's really pretty and I love it," she said.

However, Sidibe's still looking for shoes. With that in mind, she said she's trying to a tip from fellow star Tom Hanks, who told her to find comfortable footwear for the red carpet.

"(It's) harder for a girl than a boy. But I'm trying, I'm really trying to get comfortable shoes for the Oscars," she said.

Sidibe, who is new to the world of Hollywood and designer gowns, said she's gotten a lot of practice on the red carpet in recent months.

"I could teach a class on it now," she said.

What would be her top tip?

Sidibe said you should always have your cell phone and lip gloss at-the-ready in your clutch.

"Have them with you all the time."

Could that be because she's waiting to hear from Justin Timberlake?

Sidibe, who has been open about her crush on the singer, told Rodriguez, if she got a call from Timberlake asking her to go to the Oscars with him instead of her mom, she wouldn't ditch her flesh and blood.

But, she added, "He should meet me at Red Lobster afterwards."

Sidibe seems to have gotten acclimated to rubbing elbows with stars. She described the Oscars luncheon as a kind of graduation.

She explained, "It felt very high school, like I wanted to sit next to Carey (Mulligan) when we walked around to get our picture taken, and then I went up on stage to get my nomination certificate, and then I got off and Meryl Streep says, 'I just took the cutest picture of you,' and it's like, 'Aw, thanks Auntie Meryl.'"