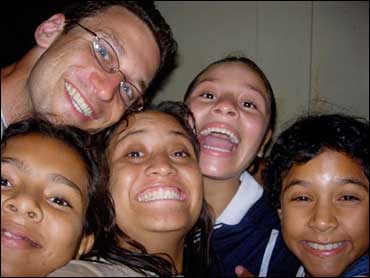 At the base of a volcano in the middle of Lake Nicaragua, there's an orphanage. Although Third World orphanages aren't normally festive places, on this day, at this time, CBS News correspondent Steve Hartman reports that there was reason to celebrate: the arrival of a young man named Ben Schumaker.

Schumaker comes from a faraway place called Wisconsin, and he comes bearing gifts. "Ideally these would be something that the kids could hold onto for their whole lives," he says.

Schumaker carries a suitcase with 62 pounds of portraits — portraits of the kids, a painting for just about each and every one of them.

"They share everything, so they don't have much they can call their very own," says Jayden Kirn, a director at the orphanage. "I think it will touch them profoundly once they get down and get a private moment to sit and look at that picture."

Remember, these kids didn't have parents snapping baby pictures. Most don't even have a single photo, let alone a precious painting.

Schumaker calls this The Memory Project. The idea is to establish a sense of personal heritage. He started it in college and still runs it out of a bedroom at his parents' house in Madison, Wis. So far, he's given out more than 4,000 portraits to orphans around the world.

Of course, Schumaker doesn't paint them all. Instead, he gets someone to take photos of the kids, then sends those photos to high school art teachers across the United States; the teachers assign the portraits to their students.

This is where the idea goes from good to genius. The American kids who paint these portraits have to spend hours staring into the faces of their orphan subjects. Schumaker says that after working on them for so long — after painting their eyes especially — there's often a real connection.

"Every day they come into the art classroom and, bam — there it is — looking right into the eyes," he says. "To be totally honest, that's the main reason why I do this work."

Schumaker says for every portrait he gives out, there's a student back home who is now a little more aware of our needy world. That's why he eventually says he'd like to make his Memory Project part of every high school art class in the country.

"And if it can raise the net level of compassion in the world by that much, I'll be happy," he says.

To Schumaker, compassion is a word that's worth a thousand pictures.

To learn more about The Memory Project, click here. To find out more about the orphanage featured in the story, go to Friends Of The Orphans.

Over 4,000 rescued in Florida after Ian