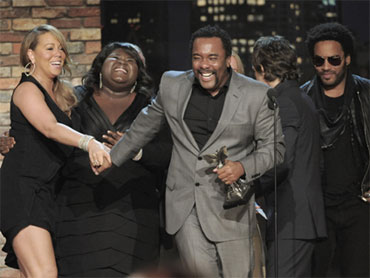 Sidibe won best actress Friday for "Precious: Based on the Novel `Push' by Sapphire," playing an illiterate teen pulling herself out of an abyss of neglect and abuse. Mo'Nique earned the supporting-actress honor as the girl's loathsome mother.

All four acting winners are up for the same honors at Sunday's Academy Awards, where Bridges and Mo'Nique are the front-runners and newcomer Sidibe was nominated for her screen debut.

"Gabby, you are truly a special gift to the universe, baby," Mo'Nique said. "For people to get to know you and be in your presence, they are all honored."

Though she has dominated her category at earlier film honors, Mo'Nique said backstage she had not prepared a speech for the Oscars, "because I think the universe would say, `You have a lot of nerve.'"

"Precious" swept every category for which it was nominated, including best screenplay by a first-time writer for Geoffrey Fletcher. He and director Daniels also are nominated at the Oscars, where "Precious" is among the best-picture contenders.

Sidibe said her mother used to give her two dollars to go to school and that she saved the money to see an independent film, "Welcome to the Dollhouse," at a theater her bus would drive past.

"Hey, I could do that," Sidibe said. "To be corny, you could say that's when my independent spirit was born."

Accepting the directing award, Daniels wisecracked, "Kathryn Bigelow's not here tonight. I am," referring to the maker of "The Hurt Locker," the favorite to win best director at the Oscars.

Bridges, the best-actor favorite at the Oscars for his role as a boozy country star trying to turn his life around, performed one of the tunes he sings in "Crazy Heart" at the Spirit Awards earlier in the show before accepting his acting prize. "Crazy Heart" also won for best debut film for first-time director Scott Cooper.

"He never directed a high school play before, but he did a great job," said "Crazy Heart" co-star Robert Duvall, who joined Cooper on stage.

Bridges thanked Duvall, a producer on the film who got the project rolling after reading the script.

"We couldn't have done this without you, man," Bridges told Duvall. "Thank you for the gig."

Borrowing a line from the Dude, the laidback bowler he played in "The Big Lebowski," Bridges held his Spirit Award aloft and told his wife in the audience, "This is really going to tie the room together, baby."

Harrelson won for his role as a soldier breaking news to next of kin that a love one has died in action. He had kind words for the other nominees, who included fellow Oscar contender Christopher Plummer for the Leo Tolstoy drama "The Last Station."

"You're all better," Harrelson told his competitors. "Actually, I don't know how you distinguish one performance from another. It's never felt right to me to declare a winner. We're all just actors and lucky to be doing this. Of course, now it feels a little more right."

Joel and Ethan Coen's "A Serious Man," following the troubles of a Jewish professor whose life is unraveling, won the Robert Altman Award presented for a movie in the spirit of the ensemble films of the late director. "A Serious Man" also earned the cinematography award for Roger Deakins.

• Documentary: "Anvil! The Story of Anvil," directed by Sacha Gervasi.

• John Cassavetes Award for a film made for less than $500,000: "Humpday," directed by Lynn Shelton.

The Spirit Awards normally are handed out at an afternoon ceremony along the beach in Santa Monica the day before the Oscars. With the event marking its 25th year, organizers made it a Friday night bash in downtown Los Angeles.

Presented by the cinema group Film Independent, the Spirit Awards honor movies that cost less than $20 million to make, with a significant part of their budget originating outside the Hollywood studio system. Other criteria for nominations include originality and provocative subject matter.