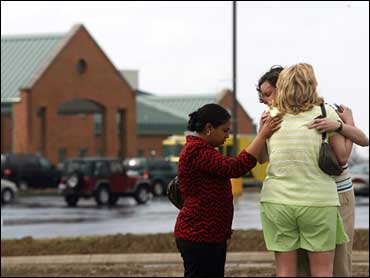 Theater often punctuated the Rev. Fred Winters' sermons, so parishioners were initially unfazed when a stranger strode down First Baptist Church's main aisle as Winters preached and, with a series of bangs, made the pastor's Bible explode into a raft of confetti.

But as Winters ran from the front of the sprawling red brick church Sunday and collapsed with a fatal gunshot wound to the chest, churchgoers realized they were witnessing something horrifyingly real.

"I only briefly saw the guy and I didn't know who I was looking at and I did not recognize the individual," said Mark Jones, worship music pastor for the church.

As the man approached Reverend Winters, reports CBS News correspondent Dean Reynolds, he began speaking to him - striding purposefully toward the front of the church where Winters, the father of two and leader of the church for nearly 22 years, stood waiting to resume the service.

The gunman's .45-caliber semiautomatic pistol jammed and two congregants quickly wrestled him to the ground as he waved a 4-inch knife - but not before all three were stabbed and Winters lay dying in the sanctuary's side aisle.

"We thought it was part of a drama skit ... when he shot, what you saw was confetti," parishioner Linda Cunningham, one of about 150 people who attended the early morning service, said of the congregation's initial reaction. "We just sat there waiting for what comes next not realizing that he had wounded the pastor."

The gunman, identified only as a 27-year-old man from Troy pending possible charges, got off four shots in all, the first of which was deflected by Winters' Bible, said Illinois State Police Director Larry Trent.

"It exploded the Bible," Trent said Sunday. A subsequent shot struck Winters in the chest.

The gunman entered First Baptist Church shortly after 8 a.m. and exchanged words with Winters before he started shooting, Trent said.

(KMOV)
None in attendance seemed to recognize him and investigators do not know details of the conversation, Trent said, but they planned to review an audio recording of the service. Some parishioners said Winters (pictured at left) may have greeted the gunman and asked if he could do anything for him.

Winters had stood on an elevated platform to deliver his sermon about finding happiness in the workplace - titled "Come On, Get Happy" - and managed to run halfway down the sanctuary's side aisle before collapsing, said Cunningham, whose husband is a minister of adult education at the 1,200-member church.

"Dramas have been incorporated into services, so I could see people first thinking it was part of a skit," said First Baptist member Christy Leith of Granite City, who said she has attended the church for about 10 years.

Parishioners knocked the gunman between sets of pews, then held him down until police arrived, said church member Don Bohley, who was just outside the sanctuary when the shooting began.

The gunman suffered "a pretty serious wound to the neck" while one parishioner had lower back wounds, Trent said.

Authorities didn't know whether Winters knew the gunman. Trent said investigators had not immediately uncovered evidence of a criminal background or mental illness.

So far very little is known about the suspect, Reynolds reports, or his motive.

Trent said police also were investigating whether a red Jeep that remained parked outside the church Sunday night, under State Police watch, belonged to the suspect.

The Jeep was registered to the address of a 27-year-old man in an upscale neighborhood in Troy. No one answered the door at the residence Sunday. A woman from a neighboring home cried while hugging other neighbors in the cul-de-sac, but all declined comment.

A man of the same age whose mother's name also is registered at the Troy address was featured in a St. Louis Post-Dispatch article detailing his battle with Lyme disease. In the article, the man's mother said the disease left lesions on his brain and that doctors had diagnosed him as mentally ill before discovering the disease.

In the August 2008 article, the mother said her son was taking several medications and had difficulty speaking after contracting the tick-borne illness.

Police would not confirm that the man in the article was the church shooting suspect. The Associated Press is not naming the man because no one has been charged in the shooting.

The Rev. Mark Jones, another First Baptist pastor, said he briefly saw the gunman before a weapon was pulled. Jones then walked to an adjacent room and did not see the shooting, though he heard a sound like miniature fire crackers.

"We have no idea what this guy's motives were," Jones said outside the church. "We don't know if we'll ever know that."

The gunman and 39-year-old parishioner Terry Bullard underwent surgery at St. Louis University Hospital and were in serious condition Sunday evening, according to hospital spokeswoman Laura Keller. The other victim, Keith Melton, was treated and released from Gateway Regional Medical Center.

"I would call it heroic," Trent said. "While many understandably were stuck to their seats, they took to action."

But Melton said he was struggling with whether he acted quickly enough.

"It's very hard to see when I had to see my pastor murdered," Melton told St. Louis station KDSK-TV. "A half-second more, might that have made a difference?"

First Baptist had an average attendance of 32 people when Winters became senior pastor in 1987; it now has about 1,200 members, according to the church's Web site. Winters was former president of the Illinois Baptist State Association and an adjunct professor for Midwestern Baptist Theological Seminary, according to the site.

The church sits along a busy two-lane highway on the east side of Maryville, a fast-growing village of more than 7,000 about 20 miles northeast of St. Louis. A farm sits directly across from the church, but subdivisions of newer homes can been easily seen from every side.

"I want people to know that this is a good community. Things like this just don't happen," said Mayor Larry Gulledge, who has known Winters for 25 years.

Parishioner Sharla Dryden, 62, pulled into the church parking lot for a 9:30 a.m. service Sunday to see "just a lot of chaos, lot of police, fire, and people just devastated."

"I would have been devastated if anyone had been shot, but to hear it was the pastor was terrible," Dryden said. "You just never expect this to happen at a church."

A statement on First Baptist's Web site asked for prayers for Winters' family, the parishioners who tackled the gunman, the gunman and his family, and for church members.

More than 1,000 people turned out for an evening prayer service for church members in nearby Edwardsville. Some cried and clutched Bibles, as Jones pressed the crowd for resilience and spirituality after "this attack from the forces of hell."

"We need to reassure our hearts and reinforce our minds that Pastor Fred is in that place that we call heaven," Jones said.

Last month, a man shot and killed himself in front of a cross inside televangelist Robert H. Schuller's Crystal Cathedral in Garden Grove, Calif. In November, a gunman killed his estranged wife in a New Jersey church vestibule as Sunday services let out.

In July 2008, two people were killed and six wounded in a shooting rampage at the Tennessee Valley Unitarian Universalist Church in Knoxville, Tenn. An out of work truck driver who police say targeted the church for its liberal leanings pleaded guilty to the shootings and was sentenced to life in prison without parole.