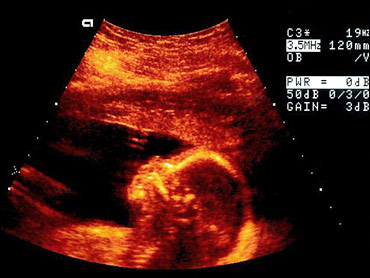 Prenatal testing offers women and their families the opportunity to prepare for the birth of their child. The overwhelming majority of women get good news, but as The Early Show co-anchor Rene Syler reports, some do not.

Bruce Campbell calls his son Jesse, "the soul man." As his 6-year-old dances, Bruce Cambell says, "He's our music man, he's got all the soul in the family."

If the Campbells had taken the advice of their obstetrician, Jesse wouldn't be eating breakfast with the family.

To his wife, Elizabeth, Bruce Campbell says, "It was so ironic because I think it was the OB who told you when you got the diagnosis that she would not proceed, because she couldn't do that to the other child."

But the Campbell's other child, Ian, is proud of Jesse.

Ian says, "Jesse is a little different because he can be a little slow, but he's pretty fast for a kid who is 6-years-old with Down syndrome."

In 1997, Elizabeth Campbell was 40 and pregnant and had decided not to have any special prenatal tests. But that changed when routine blood work revealed a 1-in-12 chance of having a child with Down syndrome. Amniocentesis comfirmed the diagnosis.

Bruce Campbell recalls, "I said, 'This is it. This is when we find out once and for all what we really think about life, death, God and who we are as a family.'"

The family found out their baby had a healthy heart and within hours were on the phone with parents of other Down syndrome children who painted a very different picture than their doctor.

Elizabeth Campbell says, "You get the phone call and they tell you that the fetus has Down syndrome. What they can't tell you and they don't tell you is that you will fall in love with this child, this child will delight you, you will thrill at every accomplishment."

Not surpising, according to Professor George Annas, one of the country's leading bioethicists.

He says, "Very often we have very strange ideas about various disabilities, that they're incompatible with life or incompatible with a happy life or would be a drain on a family. The more information you can get about real-life chances and choices, the better it would seem to me."

While the Campbells got their news during the second trimester, today, more and more women are being offered non-invasive screening options during the first trimester, which means news, good and bad, can be learned earlier.

Diana Graham and her husband married almost two years ago. The next step in their storybook romance - a baby.

Diana Graham says, "We started out going for what we thought was going to be a relatively routine ultrasound. And we were excited. And we thought, 'Well we'll see the baby. We'll get some pictures.' You know, to send to our parents and things like that."

They had a procedure called a Nuchal Translucency sonogram - one of the recent advances in first trimester testing. And the news wasn't good.

Diana Graham says, "What we were told by all the different doctors that we spoke to was that most likely the baby wouldn't be born. That fetuses with these findings usually die during the pregnancy."

The tests showed the baby had a cystic hygroma, a fluid-filled sac on the back of its neck. After terminating their pregnancy, they found out the baby was missing a chromosome.

Diana Graham notes, "It's been a really big roller coaster for us. I mean this was three months ago. So I still should be pregnant. And the baby would have been due in October. So it's up and down. And as we get a little closer to October-- that's been a little bit harder for me."

For Diana Graham, the early knowledge was helpful.