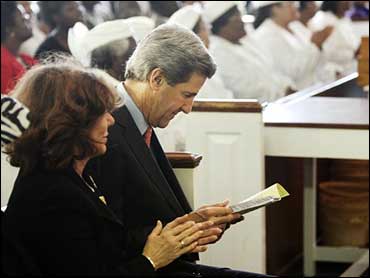 In Florida, Sen. Kerry had two simple messages for voters in a predominantly black Fort Lauderdale church Sunday: Praise the Lord, and go to the polls.

Over the next week, both candidates will blitz the 11 critical toss-up states, trying to build fervor in a race that will depend heavily on voter turnout.

In the final eight days, both campaigns will rely on star power to whip up voter enthusiasm. This week Arnold Schwarzenegger will stump for Mr. Bush, and Bill Clinton campaigns with Kerry.

Former Vice President Al Gore spent Sunday in Florida telling blacks embittered by his narrow loss in the 2000 presidential election that "it doesn't have to be this way" and is urging them to turn anger into energy at the polls.

"Don't turn it into angry acts or angry words," Gore said at one stop during a tour of mostly black churches. He also urged worshippers to take advantage of a state law that permits voting before Election Day, Nov. 2.

"Early voting is a good idea," he said. "You want to give them plenty of time to count all the votes."

Black churches are an important factor in turning out minority voters and are historically politically active.

Black voters have historically supported Democrats. However, this year black support for President Bush is way up, from 9 per cent in 2000, to 18 per cent this year.

Bishop Harry Jackson, who leads the 3,000 member Hope Christian Church in College Park, Md., tells CBS News Correspondent Randall Pinkston he's supporting President Bush because he believes the president is more in tune than Kerry with black voters' beliefs on moral issues - such as opposition to abortion and gay marriage.

President Bush and Kerry switched places Sunday, the president campaigning in New Mexico where Kerry was the day before and the Democratic senator taking Mr. Bush's place in Florida.

The president's only campaign event of the day was a late-afternoon rally at a high school in Alamogordo, N.M.

New Mexico offers just five of the 270 electoral votes needed to win the presidency, but Mr. Bush lost New Mexico in 2000 to Democrat Al Gore by a mere 366 votes.

As he has done in recent days in Florida and other too-close-to-call states, Mr. Bush is concentrating his time in a Republican stronghold in the southeastern part of the state, hoping to boost enthusiasm to drive up his vote totals next Tuesday, Election Day.

The president is pushing national security as the reason for another four years, while Kerry is attempting to broaden the debate.

In a taped interview on Fox News to be aired Monday, Mr. Bush says the nation will always be vulnerable to another terror attack.

The nation is safer from terrorism than it was - but that "whether or not we can be ever fully safe" is "up in the air," he says.

Mr. Bush says he is sure terrorists still "think about" disrupting the November elections. But he says there's "nothing specific" - just a "kind of general intent."