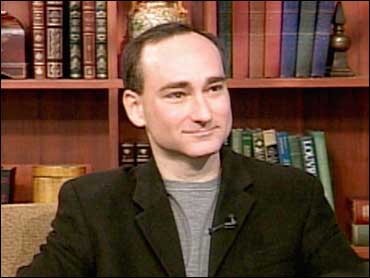 Best-selling novelist Chris Bohjalian has won legions of fans with his tales of ordinary people dealing with extraordinary challenges.

His latest book, "Idyll Banter," is a collection of true stories drawn from his newspaper columns and magazine essays chronicling life in his hometown of Lincoln, Vt.

It celebrates a small-town life that the author says really exists in the way our imagination suggests it would.

"I hope 'Idyll Banter' is an exploration of what one rural village can teach modern America," Bohjalian tells The Early Show co-anchor Harry Smith. "That's why you should always have the outhouse race before the parade. Or take note, Florida: Always hold your presidential elections using ballots twice the size of place mats and have the type twice the size of a Dr. Seuss book.

"More importantly, what I found in a tiny village and because I always grew up in suburbs and lived as a young man in New York City, I had a sense that tiny villages were filled with small-minded busy bodied people who ate too much peanut butter and jelly. And what I found instead was a sense of community welcoming and hospitable and that has a tolerance for eccentricity that is unappreciated," he adds.

Now That the Cows Are Gone

The sun wouldn't rise for two more hours, but by 5:00 in the morning Tom Densmore was in the barn milking cows. When the trucks arrived shortly before 8:00-two the length of tractor trailers and a third perhaps half that long-he had finished milking the animals, but he hadn't begun to disassemble the feed carts or milking machines. That would have to wait until the afternoon.

It took Densmore and the truckers three hours to march his sixty-head herd up the metal ramps into the trucks, about what the thirty-four-year-old farmer had expected. By 11:30, the trucks were beginning their slow descent on the steep road that had led them up to the Vermont hill farm, winding past miles of new-growth forest, and then through the center of town, with its immaculate white church, general store, and two dozen village houses with sharply pitched roofs.

The animals arrived at the auction barn, about three hours away, in midafternoon. It took auctioneer Herb Gray less than ninety minutes to dispose of the herd, selling the milking cows one by one and some of the calves in small groups. Most of the cows brought Densmore $800 to $1,100 each, while the calves went for $200 to $700 apiece-not enough to pull him completely out of debt.

Densmore's mother, sister, and one of his brothers stood by him as his cows were scattered to farms across Vermont and New Hampshire. Nita, Nola, and Nicki-alliteration that signaled the cows were from the same family-were separated, as were three of Densmore's best producers: Kim, Amy, and Fayne. Every year they gamely produced well over 16,000 pounds of milk each.

Densmore's sixty-head herd was small even by Vermont standards, but it represented the last dairy farm in Lincoln, and the auction last December formally marked the end of an era. Lincoln, a village thirty miles southeast of Burlington, boasted forty-six active dairy farms as recently as 1945. Today there are none. There may be an occasional cluster of cows or beef cattle visible on the hillsides that roll throughout Lincoln, but there will be no more silver trucks from the Eastern Milk Producers Cooperative winding their way through town or trying to negotiate the narrow roads that link the homes in the hills.

Like many of Vermont's small rural towns, Lincoln has changed. In 1950, there were 11,019 dairy farms in Vermont. Today there are barely 2,300. The farms that remain are bigger-an average Vermont dairy farm has seventy-three milking cows, up from fifty-five as recently as 1978-and the cows produce more milk: roughly 15,500 pounds per cow per year these days, versus 11,500 pounds fifteen years ago.

Some of the farms disappeared simply because the farmers grew too old to milk fifty or sixty cows twice a day, and their children chose more lucrative occupations: carpentry or real estate or manufacturing jobs in Connecticut and Massachusetts. Other farmers got out when they discovered that while they may have been cash-poor, their land was valued by down-country immigrants: Selling a few acres a year might take care of the property taxes. And some farmers simply became frustrated by the economics of the industry. The price of milk today is unchanged from 1978, but the cost of producing that milk-everything from seed to the taxes on the land-has risen.

Some of the changes in Lincoln are immediately apparent: Meadows and pastures that once were farms have become forest. New homes have appeared in the past twelve months on both sides of the white clapboard building that houses the town clerk's office. Other changes may be harder to see, but they are no less significant: The three men and women who are Lincoln's selectmen this year are from Pittsburgh, Boston, and Grinnell, Iowa. One of them has lived in Lincoln barely two years.