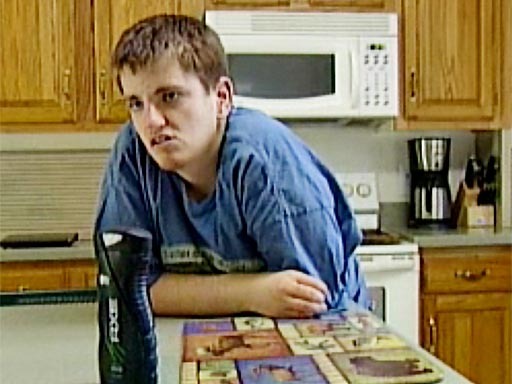 (CBS) Matthew Hummel, 20, lives in a house with padlocks on the fridge and cupboards. His parents installed an alarm system for the windows and doors - not to keep out intruders, but to keep Matthew, who suffers from a rare disorder known as Prader Willi syndrome, on a tight leash.

In addition to low intelligence (Matthew's IQ is just 40), short stature, and incomplete sexual development, the disorder causes hunger so extreme that sufferers will do almost anything to get more to eat.

And this insatiable appetite exacts a high price - on the individuals with the syndrome and on their caregivers.

In the case of Matthew Hummel, the price could be jail time.

Unable to access unlimited food in his Michigan home, Matthew - who was diagnosed when he was three - roots through the garbage and sometimes forages for food at  neighbors' homes, according to the  Upper Michigan Source.

"We threw a package of freezer burned pork chops out," Travis Hummel, Matthew's father, told WPBN-TV in Northern Michigan. "We threw them in the trash and he found them about a week later...and he ate that. I mean, pork -- raw pork."

One unidentified neighbor has had enough. He reportedly filed a complaint that could lead to breaking and entering charges against Matthew. He said Matthew has been breaking into his house since he was a teenager, and that he and his family do not feel safe.

Matthew, who also suffers from mild autism and obsessive compulsive disorder, may end up being insitutionalized, his family says. In the meantime, they say they are considering building a fence around their property.