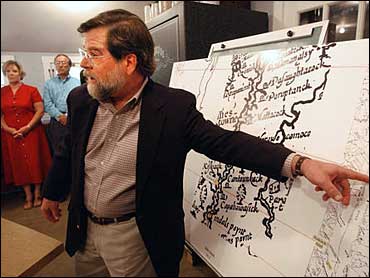 When Lynn Ripley walks around her farm overlooking the York River, she ignores the lush scenery and keeps her eyes to the ground.

Her passion for spotting and collecting pottery shards, arrowheads and other artifacts has led scientists to identify what they believe is the location of the village of the powerful American Indian chief Powhatan, father of Pocahontas.

Researchers said Tuesday that thousands of Indian and European artifacts found, along with historical descriptions, suggest the farm was the site of Werowocomoco, the central village of Powhatan's 17th-century rule over 15,000 people from the tribes of coastal Virginia.

English Capt. John Smith, leader of the Jamestown colony, would have met Powhatan on the 50-acre site. It also is where he claimed that Pocahontas begged her father to spare Smith's life, although historians question the veracity of Smith's tale.

"We believe we have sufficient evidence to confirm that the property is indeed the village of Werowocomoco," said Randolph Turner, director of the Virginia Department of Historic Resources' Portsmouth Regional Office.

He said others have proposed that the village was in the same area, but archaeological research had not been done. Early colonial documents, including Smith's 1612 map of Virginia, also gave hints of the settlement's whereabouts, he said.

The site was "a landscape of power," likely chosen to convey Powhatan's important status, said Martin Gallivan, an assistant professor of anthropology at the College of William and Mary.

This June, the college and the historic resources department will do more research on the farm.

"It's a place that may help us to add the native side of early colonial history," Gallivan said.

Soon after Lynn and her husband, Bob, bought the 300-acre, wood-covered farm in 1996, she began finding ceramic pieces, arrowheads and other items while taking walks.

"It was a ritual for me," she said. "Every day I had time, I would go walking and see what I could find. I have collected old bottles, crocks, dishes, buckles, thimbles - just laying on the surface, believe it or not."

She saved them, filling up shoeboxes and even gluing together some pieces of crockery and bottles. Today, she has thousands of artifacts, which she keeps locked in two large gun safes.

The Ripleys met two local archaeologists, David Brown and Thane Harpole, who were working on an unrelated project, and Bob Ripley mentioned his wife's collection.

The men contacted Turner. They also did initial surveys, digging 603 test holes, 12 to 16 inches deep and 50 feet apart. They found thousands more artifacts, including a blue bead that may have been made in Europe for trading.

The two archaeologists are part of the Werowocomoco Research Group, a newly formed team that includes researchers from William and Mary and the Virginia Department of Historic Resources, and a representative of the Virginia American Indian community.

The group presented preliminary findings to representatives of Virginia's eight state-recognized American Indian tribes and the Virginia Council of Indians, inviting the organizations to work with the group.

Virginia Indians were pleased to be consulted about a site that is of enormous historical significance to them, said Deanna Beacham, a member of the Nansemond tribe and outreach coordinator to the tribal and state councils.

"Frankly, usually we hear about it after something has been done," Beacham said.

Werowocomoco was about 15 miles from Jamestown, the first permanent English settlement in America, founded in 1607.

Smith claimed that in December 1607, Indians kidnapped him and that Powhatan was about to club him to death when Pocahontas threw her body over his to save him. Pocahontas was only 10 or 11 years old at the time, and some historians say Smith may have misunderstood what was an Indian adoption ritual. Smith didn't write about the event until 1624, after Pocahontas' death.

"The real story is Powhatan," who ruled one of the most complex political entities in eastern North America during the early 1600s, Turner said.

The Ripleys plan to keep the artifacts, perhaps loaning them to a museum or college. They also intend to continue living on the farm and to maintain as much privacy as possible while encouraging additional research.

"We just thought it would be a shame to deny this knowledge to the people of Virginia," Bob Ripley said.