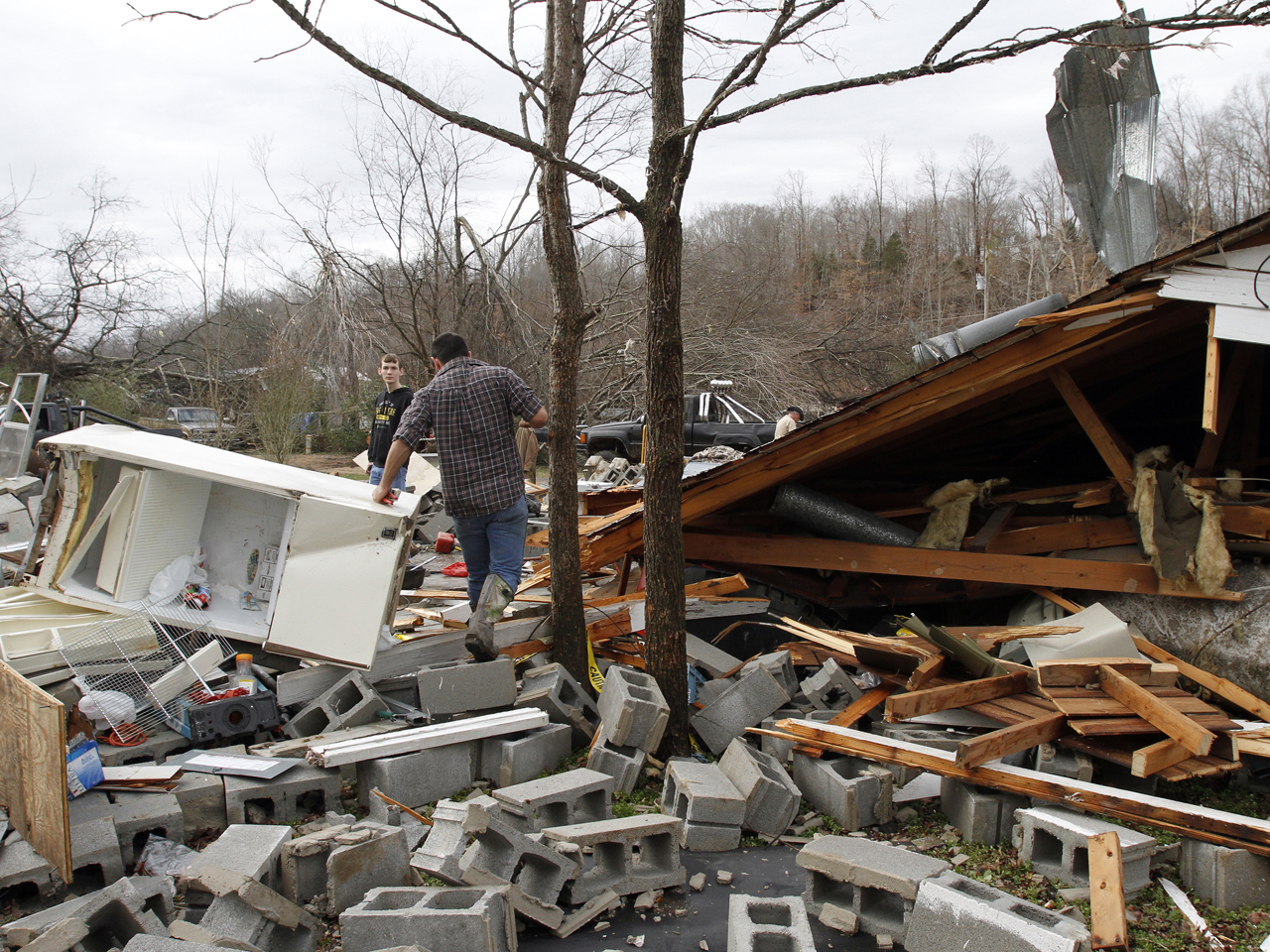 The storm system tossed vehicles on Interstate 75 in Georgia into the air, onto their roofs and into the grassy shoulder. The highway was closed for a time, and another main thoroughfare remained closed until crews could safely remove downed trees and power lines from the road. Authorities were working to rescue people reportedly trapped in homes and buildings.

A 51-year-old man was killed when a tree crashed through the mobile home roof, and nine were hospitalized for minor injuries, emergency management officials said. Residents said no traces remained of some roadside produce stands -- a common sight on rural Georgia's back roads. One other death was reported in Tennessee when an uprooted tree fell onto a storage shed where a man had taken shelter.

Georgia Governor Nathan Deal declared a state of emergency for Bartow and Gordon counties. Georgia Power reports there are 10,200 outages statewide. Of the 10,200, 5,600 outages are in the Adairsville Area and 3,500 in metro Atlanta, reports CBS affiliate WGCL-TV in Atlanta.

In Adairsville, the strange mix of debris in one yard showed just how dangerous the storm had been: a bathtub, table, rolls of toilet paper and lumber lay in the grass next to what appears to be a roof. Sheets of metal dangled from a large tree like ornaments.

"The sky was swirling," said Theresa Chitwood, who owns the Adairsville Travel Plaza. She said she went outside to move her car because she thought it was going to hail. Instead, the storm decimated a building behind the plaza. Wind gusts were powerful enough to flip several tractor-trailers onto their sides in the parking lot.

"It sounded like a freight train coming through," she said. "It looks like a bomb hit it."

Juanita Carter told CBS News she was sleeping when the tornado hit; a dangerous situation. "I was hanging. My back was across those blocks," she said. "I don't remember nothing after that. I blacked out."

Danny Odum and Rocky Depauw, truckers from Marion, Ill., had stopped for breakfast when the suspected tornado hit.

The pair had been driving their trucks through storm warnings all night long. They went inside to eat and Depauw got a weather alert on his phone. About two minutes later they saw debris flying through the parking lot and ran for an inner room.

"I've been stopping here for probably 40 years," Odum said. "I just stopped and had breakfast this morning, and this happened."

After it passed, Odum said he went outside to find his truck that was hauling diapers on its side with his dog Simon, a Boston terrier, still inside. Simon was scared but otherwise fine.

Depauw's truck was parked next to Odum's and was damaged but still upright. He speculated his heavy haul of cat litter may have helped his truck handle the hit better than his friend's.

Not far down the road, at Owen's Bar-B-Que, Chrystal Bagley and her coworkers heard warnings about severe weather on the radio, but they didn't hear Adairsville included. Around 11:45 a.m., the doors started rattling, and chairs and knick-knacks began blowing around the room as the door flapped open.

"We heard this big old whooshing noise like a train, and then we ran to the restroom, but we had to dodge objects," she said. "It was real scary."

By the time they reached the restroom, the 20 seconds of a roaring noise and shaking walls had stopped, and everyone was OK.

Bartow County Fire Chief Craig Millsap said there were reports that two storm warning sirens may have failed, but he said they were not in the hardest-hit area.

Anthony Raines, 51, died in Adairsville when a tree crashed through the roof of his mobile home and crushed him as he lay in bed, Bartow County Coroner Joel Guyton said.

A shelter was set up at community recreation center as temperatures were expected to plummet to the 30s and 40s overnight and people had no heat or power. About 12,000 customers statewide had no electricity.

Authorities were still investigating several sites to determine if damage was caused by twisters. Since Tuesday, the system had caused damage across a swath from Missouri to Georgia.

In recent days, the South and Midwest had enjoyed unseasonably balmy temperatures in the 60s and 70s. A system pulling warm weather from the Gulf of Mexico collided with a cold front moving in from the west, creating volatility.

In Tennessee, officials confirmed that a tornado with peak winds of 115 mph touched down in Mount Juliet. No serious injuries were reported even though the path of damage was about 150 yards wide. At least six other tornadoes were reported statewide.

At a shopping center in Mount Juliet, large sheets of metal littered the parking lot and light poles were knocked down.

One wall of a Dollar General store collapsed, and the roof was torn off.

Mark Fulks Jr. runs Mark's Automotive with his father in a building attached to the Dollar General. The garage door was blown off his shop and sitting on one of the cars inside, and Fulks said several of the cars they were working on had their windshields blown out.

A distribution center for The Tennessean newspaper also had severe damage. Rick Martin, who bags the newspapers and helps his wife deliver them, was shocked when he saw what was left. The metal frame of the building still stood, but its cinderblock walls had crumbled, and papers and plastic bags littered the trees.

"We feel real lucky," he said Wednesday morning as he looked at the damage. "I would have hated to be in here when this happened."

The deaths ended the nation's longest break between tornado fatalities since detailed records began being kept in 1950, according to the Storm Prediction Center and National Climatic Data Center. The last one was June 24 in Florida. That was 220 days ago as of Tuesday.

The last day with multiple fatalities was June 4, when three people were killed in Missouri.

CBS meteorologist David Bernard reports there were tornado watches stretching from Tallahassee, Fla., through Georgia and the Carolinas Wednesday night. The Washington, D.C., area was also under a tornado watch.