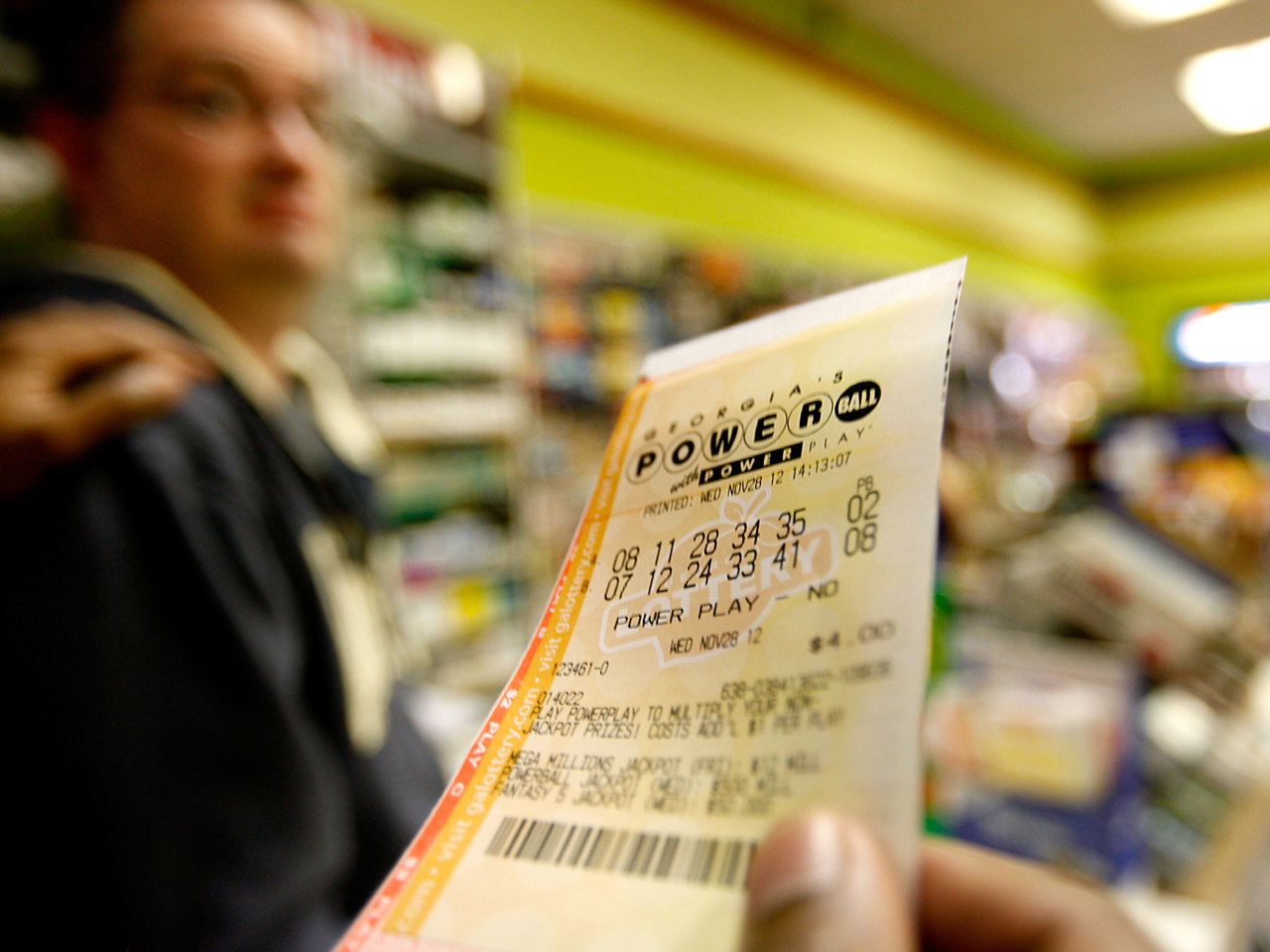 Early Thursday morning, Sue Dooley, a production coordinator for the Multi-State Lottery Association, told CBS Radio News that one winning ticket had been bought in each state.

The numbers drawn Wednesday night were:

Dooley told CBS Radio News that the jackpot increased to $587.5 million by the time of the drawing, making the cash option $384 million, which will be split equally.

An additional 8,924,123 players won smaller prizes, including about 60 who each won a million-dollar prize for matching five numbers, Dooley said. Eight of the $1 million tickets were sold in New Jersey, state lottery officials said. Indiana and Michigan each had two $1 million winners.

It was not clear whether the winning tickets belonged to individuals or were purchased by groups. Arizona lottery officials said early Thursday morning they had no information on that state's winner or winners but would announce where it was sold during a news conference later in the day. Lottery officials in Missouri did not immediately respond to phone messages and emails seeking comment.

Americans went on a ticket-buying spree in recent days, the big money enticing many people who rarely, if ever, play the lottery.

CBS News correspondent Anna Werner reports the odds of winning were 1 in 175 million. Still, that didn't deter Americans from purchasing a shot at the second-largest payout in U.S. history and the highest-ever Powerball game. More than 160 million tickets were sold, going at a rate of 130,000 a minute nationwide on Wednesday. At one point, Florida was selling 200,000 tickets per minute.

Dooley said 563 million tickets were sold for Wednesday night's drawing, which she believes is a record.

"Starting on Saturday we will start our jackpot over again at $40 million and work it up again," Dooley told CBS Radio News.

The jackpot had already rolled over 16 consecutive times without a winner, but Powerball officials said earlier Wednesday they believed there was a 75 percent chance the winning combination will be drawn this time.

Past winners of mega-lottery drawings and financial planners had some sound advice for those holding the winning tickets: Stick to a budget, invest wisely, learn to say no and be prepared to lose friends while riding an emotional roller-coaster of joy, anxiety, guilt and distrust.

"I had to adapt to this new life," said Sandra Hayes, 52, a former child services social worker who split a $224 million Powerball jackpot with a dozen co-workers in 2006, collecting a lump sum she said was in excess of $6 million after taxes. "I had to endure the greed and the need that people have, trying to get you to release your money to them. That caused a lot of emotional pain. These are people who you've loved deep down, and they're turning into vampires trying to suck the life out of me."

The single mother kept her job with the state of Missouri for another month and immediately used her winnings to pay off an estimated $100,000 in student loans and a $70,000 mortgage. She spent a week in Hawaii and bought a new Lexus, but six years later still shops at discount stores and lives on a fixed income — albeit, at a higher monthly allowance than when she brought home paychecks of less than $500 a week.

"I know a lot of people who won the lottery and are broke today," she said. "If you're not disciplined, you will go broke. I don't care how much money you have."

Lottery agencies are keen to show off beaming prize-winners hugging oversize checks at celebratory news conferences, but the tales of big lottery winners who wind up in financial ruin, despair or both are increasingly common.

There's the two-time New Jersey lottery winner who squandered her $5.4 million fortune. A West Virginia man who won $315 million a decade ago on Christmas later said the windfall was to blame for his granddaughter's fatal drug overdose, his divorce, hundreds of lawsuits and an absence of true friends.

The National Endowment for Financial Education cautions those who receive a financial windfall — whether from lottery winnings, divorce settlements, cashed-out stock options or family inheritances — to plan for their psychological needs as well as their financial strategies. The Denver-based nonprofit estimates that as many as 70 percent of people who land sudden windfalls lose that money within several years.

"Being able to manage your emotions before you do anything sudden is one of the biggest things," said endowment spokesman Paul Golden. "If you've never had the comfort of financial security before, if you were really eking out a living from paycheck to paycheck, if you've never managed money before, it can be really confusing. There's this false belief that no matter what you do, you're never going to worry about money again."

David Gehle, who spent 20 years at a Nebraska meatpacking plant before he and seven ConAgra Foods co-workers won a $365 million Powerball jackpot in 2006, used some of his winnings to visit Australia, New Guinea and Vietnam. He left ConAgra three weeks after he won, and now spends his time woodworking and playing racquetball, tennis and golf.

But most of his winnings are invested, and the 59-year-old still lives in his native Lincoln. He waited for several years before buying a $450,000 home in a tidy neighborhood on the southern edge of town.

"My roots are in Nebraska, and I'm not all that much different now than I was before," Gehle said. "I'm pretty normal. I never was the kind of guy who went for big, expensive cars or anything like that. I just want something that runs."

In the first year after he won, Michael Terpstra would awaken many nights in a panic. Had he slept in? Was he late to work the night shift?

"At times I'd wake up and this would all seem like a dream," the 54-year-old said. "I'd have to walk around the house and tell myself, I did win. I'm not working anymore, and I do live here. I didn't get drunk, break into someone's house and go to sleep. This is where I'm supposed to be."

His new home is a roomy, two-story house in south Lincoln with a big-screen television and paintings of Jesus on the walls. He no longer uses alarm clocks and spends his days taking his 92-pound black lab, Rocco, on walks.

He was terrified when he first won, convinced that he would lose all of the money and have to return to work. So he lives carefully off the interest from conservative investments, with help from accountants and lawyers. He bought the new house and a truck, but struggles to name any extravagant purchases.

That said, some mega-winners still can't resist the lure of big jackpots, at least not the two-buck chances. On Tuesday, former ConAgra worker Dung Tran, a Vietnamese immigrant, walked into the same Lincoln U-Stop where he purchased the winning ticket six years ago and bought 22 more from the very employee who sold him the first prize-winner, said cashier Janice Mitzner.

Hayes is also hoping to strike rich again — she bought 10 tickets at a Dirt Cheap liquor store on her way home Tuesday while speaking with an Associated Press reporter. Unlike many big winners, she has kept a visible public profile instead of going underground, appearing on a 2007 reality TV show ("Million Dollar Christmas"), writing an online Life After the Lottery blog and self-publishing a short book, "How Winning the Lottery Changed My Life."

"We have this drawing ... and if somebody wins, God bless them," she said. "They're going to need those blessings."