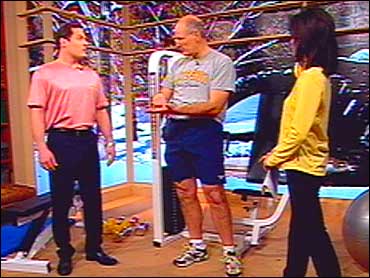 For decades, some have assumed cardio workouts help people lose weight and stay in shape. But recent studies have shown that the key to fitness and weight loss is resistance training with weights.

Fitness expert Adam Zickerman explained on The Early Show that slow resistance training with weights builds lean muscle mass. He says by comparison, aerobics builds virtually none, and only lean muscle mass can change the shape of your body to the trim, curvaceous, or muscular form that you want.

Zickerman says he developed a new exercise regime called "Power of 10" to develop a trim body. It's a 10-second cadence: 10 seconds up and 10 seconds down workout movement. You don't stop at the top or bottom, so the muscles sustain a constant, steady load for about 5 to 8 repetitions. You use a weight that will leave you "spent" by the last repetition and it will "fire" the muscles deeply and completely.

He says "Power of 10" is time saving; you are keeping muscle mass; and it's safer to lift weights slower.

In addition to exercise, Zickerman also says there are two other pillars: nutrition and rest/recovery. As for nutrition, you should trade in the fat making foods (soda, nachos and cheese, fries, monster cookies) for healthy and cell-making foods (proteins, healthy fats, whole foods and fiber).

Zickerman suggest you not go on a diet because they, he says, are temporary, but Power of 10 is a way of living. As for rest and recovery, he says that this is probably the biggest success secret of Power of 10. Zickerman says that rest is as crucial as protein, oxygen or any other nutrient. He says you can't possibly have time for the rest your body needs when you are at the gym six days a week. Also, you're prone to muscle tears and strains, joint problems, fatigue and the weakening of the immune system. Zickerman says Power of 10 is designed to let you get the rest you need between workouts.

Zickerman says there are 10 commandments to his program:

Zickerman recommends that you start with twice-a-week routines because it gets you comfortable with the form and cadence of Power of 10.

Zickerman says the exercise is appropriate for any age. He says he has worked with 15-year-olds and 70-year-olds using the Power of 10.

Zickerman warns people who have heart or orthopedic problems should not follow this program.