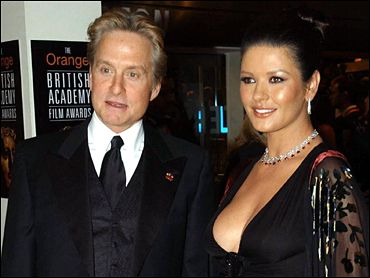 Michael Douglas and Catherine Zeta-Jones got their Hollywood ending Friday, triumphing in court over a celebrity magazine that printed unauthorized and unflattering photos of their star-studded wedding.

The couple won their lawsuit against Hello! magazine for publishing paparazzi pictures smuggled out of the November 2000 nuptials. The couple had a $1.55 million deal for exclusive pictures with rival magazine OK!

Zeta-Jones said she had felt "violated" by Hello!'s "sleazy and unflattering" images of the $2 million wedding at New York's Plaza Hotel.

High Court judge John Lindsay accepted that "distress was caused to Mr. and Mrs. Douglas." But he ruled that Hello! had breached the couple's commercial confidence rather than their right to privacy, which he said was not protected under British law.

The wedding, the judge said, was "a valuable trade asset, a commodity the value of which depended, in part at least, upon its content at first being kept secret and then of it being made public in ways controlled by Miss Zeta-Jones and Mr. Douglas."

Hello!, he said, was "not acting in good faith nor by way of fair dealing."

The Hollywood couple said they were pleased with the result of the six-week case, which brought the two A-list stars, a frenzy of journalists and a Spanish media consultant with 200 dogs to London's neo-gothic High Court.

"We deeply appreciate that the court has recognized the principle that every individual has the right to be protected from excessive and unwanted media intrusion into their private lives," the couple said in a written statement.

Hello! said it was considering an appeal.

"These rulings bear out what we have always said — that this case was not brought about privacy but about a commercial deal: money and control," publishing director Sally Cartwright said in a statement.

The couple testified in court that memories of their wedding day had been spoiled by the Hello! photos, one of which showed Douglas, 58, feeding his 33-year-old bride wedding cake.

"I don't usually like my husband shoving a spoon down my throat to be photographed," said Zeta-Jones, who won an Oscar last month for her performance as a manipulative murderess in the musical "Chicago."

Her performance in Court 35 in February was just as riveting.

Zeta Jones, resplendent in black and seven months pregnant with her second child, told how she had felt "devastated, shocked and appalled" when she realized paparazzi had gatecrashed her wedding.

"This is about a woman having the right to have her wedding the way she wants it," the Wales-born star told a packed courtroom.

"The quality was what every bride would hate to have out there. It was cheap and tacky and everything I didn't want," she said.

Douglas said the couple was still emotional about what they saw as a personal violation. "It was a devastating time. ... The damage and stress that we've gone through is irreparable," he said.

The court was told that Douglas and Zeta-Jones organized elaborate security for their wedding, attended by stars including Sean Connery, Sharon Stone, Jack Nicholson, Steven Spielberg and Anthony Hopkins.

The couple chose two photographers to capture the event and retained control over which pictures OK! would publish.

But photographers Rupert Thorpe and his wife, Michelle Day, sneaked into the Plaza and used hidden cameras to snap images which were sold to Hello!

The judge ruled that the Marquesa De Varela, a media consultant who had tried to obtain the pictures for Hello!, was not liable for damages. Douglas and Zeta-Jones had sued her and her company, along with Hello!, its editor, its Spanish counterpart Hola! and freelance photographer Philip Ramey, who allegedly helped arrange the sale.

In February de Varela told the court that she had lied in an earlier court hearing because she relied on income from Hello! to support "my three children, six grandchildren, an elderly mother and almost 200 dogs."