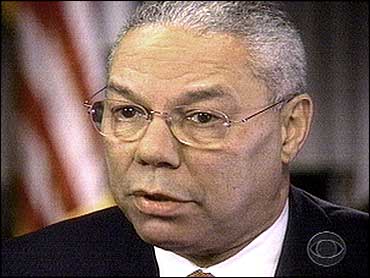 In a dramatic session of the U.N. Security Council, Secretary of State Colin Powell Wednesday presented what he called "irrefutable" audio and photographic evidence that Saddam is hiding weapons of mass destruction.

"The facts and Iraq's behavior show that Saddam Hussein and his regime are concealing their efforts to produce more weapons of mass destruction," Powell said.

He urged the Security Council to move against Saddam Hussein because Iraq has failed to disarm, harbors terrorists and hides behind a "web of lies."

Hours after his performance at the United Nations, Powell sat down for an exclusive interview with Dan Rather and 60 Minutes II, where he refuted claims that he failed to produce a smoking gun against Saddam Hussein.

"I think I put forward a case today that said there's lots of smoke. There are many smoking guns. When we say he's had thousands of liters of anthrax and we know it, he's admitted it, it's a matter of record. There's evidence, there's no question about it," said Powell.

"Is it a smoking gun that he has this horrible material somewhere in that country and he's not accounted for it? And the very fact that he's not accounted for it, I say could be a smoking gun. It's been a gun that's been smoking for years. And I think the evidence I presented today … suggests that he has not stopped in any of his efforts to develop these weapons of mass destruction," Powell told Rather.

Powell told Rather he now expects Saddam Hussein will offer some "token" to U.N. weapons inspectors who are returning to Iraq next week. But he warned that Saddam has "weeks" to come clean.

When pressed by Rather about a timetable for war with Iraq, Powell insisted he still hoped war was avoidable. But he again warned that Saddam Hussein has to make a "significant change" within weeks.

And with the U.S. preparing to forcibly disarm Iraq, if necessary, Security Council members China, France and Germany said weapons inspectors should be given more time.

"You will now hear an officer from Republican Guard Headquarters issuing an instruction to an officer in the field: 'We sent you a message yesterday to clean out all the areas – the scrap areas, the abandoned areas – make sure there is nothing there,'" Powell said, reading from super-secret communications intercepts he said painted a clear picture Iraq was moving something.

Recently declassified spy satellite photos showed a chemical weapons lab surrounded by cargo trucks and a forklift and a bunker Powell said was cleared out just before a convoy of inspectors arrived. Clear evidence, he claimed, that Iraq was "sanitizing" inspection sites.

"We must ask ourselves, 'Why would Iraq suddenly move equipment of this nature before inspections?'" he said.

And he left little doubt as to why U.N. officials have not found one scientist who will talk to them, in private or outside the country.

"They were forced to sign documents acknowledging that divulging information was punishable by death. Anyone who agreed to be interviewed outside Iraq would be treated as a spy," Powell said at the U.N.

Speaking to the U.N., Powell made no specific request for an authorization of force or a firm deadline for Iraqi compliance. But he did make clear that the United States did not want to wait much longer.

"Clearly, Saddam Hussein and his regime will stop at nothing until something stops him," he said. "Leaving Saddam Hussein in possession of weapons of mass destruction for a few more months or years is not an option – not in the post-Sept. 11 world."

Powell listed several claims he said were "based on solid intelligence": That scientists were told to hide prohibited items in their homes; that other items were stashed in cars driven around the countryside to avoid detection; and that Saddam's son, Qusay, had ordered the removal of all prohibited weapons from palaces.

The most chilling moment came in an intercept in which an Iraqi officer tells a subordinate to erase all references to "nerve agents" from over-the-air, or wireless, communications.

"Why did he focus on wireless instructions?" asked Powell. "Because the senior officer is concerned that somebody might be listening. Well, somebody was."

Powell said the United States estimates Iraq has 100 to 500 tons of chemical weapons — enough to fill 16,000 rockets and cause mass casualties over an area of 100 square miles. Quoting human sources, Powell said Saddam has ordered his field commander to use chemical weapons if the country is attacked.

Powell also claimed that the U.S. had evidence of up to 18 mobile biological weapons laboratories in Iraq, and said Saddam "has the wherewithal to develop smallpox." He raised doubts that Iraq had stopped trying to develop nuclear weapons, long-range missiles or unmanned aerial vehicles "well-suited for dispensing chemical and biological weapons."

In the final portion of his nearly 90-minute speech, Powell laid out suspected ties between Iraq and al Qaeda. He claimed a bin Laden lieutenant, Abu al-Zarqawi, was running a European al Qaeda network from Baghdad, and had set up a poison factory in northern Iraq.

He also claimed al-Zarqawi had received medical treatment in Baghdad after being wounded in Afghanistan.

Saddam's ties to terrorism, Powell said, are a threat the world cannot risk.
"Ambition and hatred are enough to bring Iraq and al Qaeda together," he said. "The combination is lethal."

Powell said Iraq and al Qaeda forged a non-aggression pact in the early 1990s and held at least eight high-level meetings since them. He accused the Iraqis of providing al Qaeda operatives with training in the use of chemical and biological weapons.

It was "an incredible presentation of a web of evidence, not just a theory, woven together in an easy-to-understand, comprehensive way," he said.

"The clear goal behind holding this meeting ... is to sell the idea of war and aggression against Iraq," he said.

He argued analyses conducted by the inspectors "indicated the absence of any indication of proscribed biological, chemical, or radiological – or indeed any other proscribed activity – anywhere in Iraq."

Weapons programs, Al-Douri said, "require huge production facilities. Such things cannot be concealed. Inspectors have crisscrossed all of Iraq and have found none of that."

He also said Iraq "encourages its scientists to submit to interviews" and denied the existence of mobile weapons labs. Echoing Saddam's statement from earlier in the week, he said that if Iraq had a relationship with al Qaeda, it would admit it.

And as Security Council members reacted to Powell's speech, it was clear the U.S. still faces resistance.

Tang Jiaxuan, China's foreign minister, said that, "As long as there is still the slightest hope for political settlement, we should exert our utmost effort to achieve that."

Dominique de Villepin, the French foreign minister, also said inspections should continue under "an enhanced regime of inspections monitoring" and that Iraq must do more to cooperate.

"The use of force can only be a final recourse," de Villepin said.