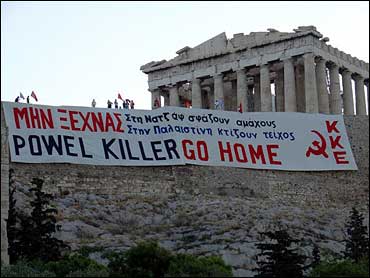 Secretary of State Colin Powell on Saturday canceled a weekend visit to attend the closing ceremony of the Olympics, just hours after demonstrators marched through central Athens.

In a letter, Powell thanked Foreign Minister Petros Moliviatis "for the especially successful and secure organization of the games."

"The secretary considered a number of factors. The press of business in Washington made him decide he could not visit at this time," Cooper said.

"What's going on in Iraq and Sudan require the secretary's close attention," he said.

Many Greeks had wondered why Powell planned to visit this weekend, knowing his presence would likely provoke protests. Until Powell announced his visit, there had been none of the anti-American demonstrations that were feared in the run-up to the games.

On Friday, riot police used tear gas to disperse hundreds of demonstrators who took part in a protest against the Powell visit. About 1,500 people who took part in the march were prevented from reaching the U.S. Embassy to protest Powell's trip and the policies of President George W. Bush.

"It is an enormous victory of the anti-war movement that managed to cancel the visit of the arch-killer Powell," protest organizer Yiannis Sifahakis told The Associated Press.

Just hours before Powell was to arrive, Greece's Communist Party displayed a large banner at the site of the ancient Acropolis to protest his trip.

"Powell killer go home. Don't forget that civilians are being slaughtered in Najaf and a wall is being built in Palestine," read the banner, which was raised on one side of the Acropolis Hill.

It was removed after the news spread that Powell wasn't coming to Athens.

Communist Party member Aristotelis Gontikas said Powell's cancellation was a victory for those opposed to American policies and was not targeted at Americans.

"I believe that the reaction of the Greek people still counts. It is not by chance that Greeks measure in polls as the most anti-American," Gontikas told the AP at the Acropolis.

The party said a protest rally that was to begin in front of the old campus of Athens University and end at the U.S. Embassy would still be held.

"The protest will now be transformed into a festival," Gontikas said.

The International Olympic Committee said it had no comment on Powell's decision, with spokeswoman Giselle Davies saying that "the IOC isn't focusing on any one individual guest who is coming to the games."

Greeks harbor anti-American feelings primarily over U.S. support of the 1967-74 military junta, which persecuted its leftist opponents. Many Greeks also believe Washington ignores the concerns of smaller and weaker countries.

In 1999, during a visit by then-President Clinton, battles between protesters and police turned downtown Athens into a riot zone.