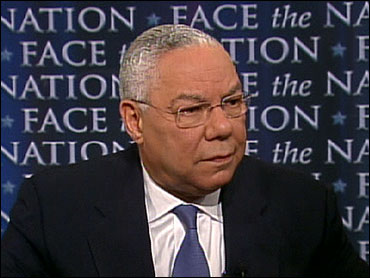 (CBS)
Colin Powell told Bob Schieffer he has "no idea" if the enhanced interrogation techniques used during the Bush administration were effective.

He said that he was aware that enhanced methods of interrogation were being considered in the aftermath of 9/11 but said he was "not privy" to the memos of legal documents that were being written.

"I think it was unfortunate but we had a system that kept that in a very compartmented manner. And so I was apart that these enhanced interrogation techniques were being considered. And they were judged not to be torture at the time," he said.

He argued that when "facing the possibility of a 9/11, you had to give some -- some flexibility to the CIA," noting that these methods were stopped under the Bush administration.

"It's easy now in the cold light of day to look back and say, you shouldn't have done any of that," Powell said.

"But as Mr. Cheney has said very, very often, as has President Bush and all of us, if we had another attack like 9/11, say on 9/11 a year later, nobody would have forgiven us for not doing everything we could."