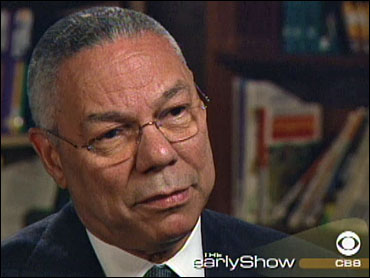 Even out of office, Colin Powell remains highly influential.

Comments on the issues of the day by the former secretary of state and chairman of the Joint Chiefs of Staff still make headlines, as evidenced by his recent remarks about the Iraq war plan.

The story appeared in AARP The Magazine.

At 69, Powell has already retired twice but, as we learned Tuesday in The Early Show series "Young at Heart," which is done in conjunction with the AARP, his career is far from finished.

Powell just got the AARP's Andrus Award, given every two years to those who have made significant contributions to society.

observes
The Early Show co-anchor Harry Smith, for a kid from the South Bronx who spent most of his life in the Army.

Colin Luther Powell was born in 1937. His parents, Luther and Maud Powell, were immigrants from Jamaica. They believed in the promise of America — and made sure that their son believed in it, too.

"You've filled your basket of accomplishment here," Smith said to Powell. "What do you know for sure?"

"I know for sure, and it fuels me and drives me," Powell replied, "that we live in a unique country and a unique society that gave my parents an opportunity 80 years ago. They came here with nothing but dreams and hopes, and they met here and married here and their children were very successful in society."

The word "successful," says Smith, doesn't even begin to describe Powell's life. After public school and a degree in geology from City College of New York, Powell was commissioned as a second lieutenant and started up the chain.

Like many others of his generation, he served in Vietnam, where he was awarded a Purple Heart. After stops that included a White House fellowship and a command in Korea, Powell became chairman of the Joint Chiefs of Staff — the nation's top man in uniform.

If his Army career was a study in achievement, the first Gulf War was his masterpiece. Some credit his doctrine of decisiveness for the rapid victory.

It was only on the eve of the second Iraq war that Powell's star began to tarnish. As secretary of state in February 2003, he gave a speech at the United Nations outlining the main reason for war with Iraq: weapons of mass destruction that, it later turned out, were never found.

It is a moment he describes as a blot on his career.

These days, Powell divides his time between private industry and fundraising work. But there's no sign that he's slowing down or, politics aside, that he's ruling anything out for the future.

"If a president were to call you and say, 'General, Mr. Secretary, we need you to do X, Y or Z,' would you respond to that?" Smith asked.

"Do you ever regret not running for president?" Smith wondered.

"No," Powell answered emphatically. "It was the right decision for me in 1995, and therefore, no regrets. What's the point of regretting it? It was done, and it was a correct decision for me and for my family, and I've never had a moment's doubt about that."

There is a sense, Smith says, that Powell has no time for regret or nostalgia: The man who once stood at the epicenter of U.S. foreign policy says he doesn't even miss it.

"There's always an interest for me," Powell conceded. "But miss it? I learned in the course of my life: Don't sit around missing something. You can't repeat it. Always look forward. So, the business interests I have, the other things I'm doing, are far removed from the military and quite a bit removed from day-to-day involvement in foreign policy or the diplomatic business.

"I always want to find something new. I don't have that many years left so, after every retirement, I always try to move beyond that which I had been doing and find new experiences, and I think those experiences keep you alive and fresh and anxious to see what tomorrow brings. So, life is full and busy. I'm not sitting around in a rocking chair!"

Though he's out of government, Powell remains active in public service. Among other things, he's involved in a project to give senior citizens better access to health care.

Powell, a car enthusiast, drives a Corvette. He's been married to his wife, Alma, for nearly 45 years.