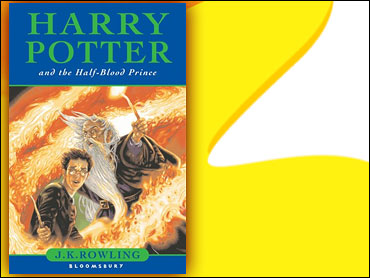 Amazon said it has received 1.4 million advance orders on its global Web sites for "Harry Potter and the Half-Blood Prince," according to Tuesday's press release. The book is scheduled to be in stores Saturday. Book 5 of the Harry Potter series was previously the company's best new product release, and more than 1.3 million copies of that book were ordered before its June 2003 release.

The feat furthered Harry Potter author J.K. Rowling's status as Amazon's best-selling author. The online retailer, celebrating its 10th anniversary, announced its biggest sellers earlier this month, with Rowling no surprise at No. 1. The "Harry Potter" author was followed by Spencer Johnson of "Who Moved My Cheese?" fame, romance novelist Nora Roberts and "The Da Vinci Code" author Dan Brown.

The release of the Harry Potter book is one of the largest events of the year for retailers, as the popular series has a huge fan following and usually attracts large sales.

Scholastic Inc., the U.S. publisher of the Potter series, is printing and shipping 10.8 million copies of the latest book.

Last week in Canada, Book 6 was sold accidentally to 14 people who snagged a copy at a British Columbia grocery store. However, a Supreme Court judge ordered them to keep it a secret and asked them to return the book before Saturday's release.

News of the record-breaking orders drove shares of the Seattle-based Amazon.com up 72 cents to close at $36.31 Tuesday on the Nasdaq Stock Market.