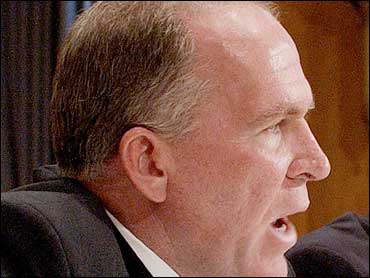 President-elect Barack Obama's top pick to head the CIA blamed his sudden withdrawal from consideration on critics who blamed him for harsh Bush administration policies on interrogations, detentions and secret renditions.

John Brennan, a 25-year CIA veteran and career analyst who became the first head of the National Counterterrorism Center in 2004, preemptively declined to take any intelligence post in the new administration in a Nov. 25 letter sent to Mr. Obama.

Who will step in to replace Brennan is still unclear. A former senior intelligence official said the Obama team did not have a designated backup when Brennan bowed out. The official and others who agreed to speak about Brennan and the Obama administration's efforts to name its intelligence team would not allow their names to be used because of the sensitivity to the nomination process.

"It does seem like a bit of a pre-emptive surrender," said Steven Aftergood, an intelligence expert at the Federation of American Scientists. "The drumbeat of criticism against him was not overwhelming. But taking him at his word, it appears that he wanted to remove issues such as waterboarding from the confirmation debate, even if he was not directly responsible for them. This raises the bar rather high for any future nominee."

Finding a candidate for CIA chief who has the operational experience and is politically "clean" will be difficult, agreed a current senior intelligence official.

John Radsan, a former assistant general counsel at the CIA, said Mr. Obama has to strike a difficult balance.

"They need somebody who rose to the level of a division chief in the clandestine service but didn't spend too much time" with former CIA directors George Tenet and Porter Goss and current director Michael Hayden.

"But in the senior ranks you can't escape the reality that the CIA is associated with controversial practices since 9/11," Radsan said.

Brennan served as Tenet's chief of staff from 1999 to 2001 and as deputy executive director of the CIA from 2001 to 2003, as the interrogation and rendition program was created.

Scott Horton, a Hofstra University law professor who has worked with the Senate Judiciary Committee on the CIA's interrogation and detention program, said he believes Congress would take a firm line against anyone closely associated with the agency's harsher policies. California Sen. Dianne Feinstein, tapped to head the Senate Intelligence Committee, opposes the CIA's interrogation program and will play a key role in confirming Obama's pick.

"Brennan knew it was going to be messy," Horton told The Associated Press.

An Obama transition team member insisted Brennan made the decision to drop out on his own, and said he will remain heavily involved in the transition. The adviser is not authorized to discuss internal deliberations so asked not to be named.

A group of about 200 psychologists published an open letter to Mr. Obama on Monday opposing Brennan's leadership of the CIA. They cited several media interviews in which they deemed Brennan insufficiently opposed to rendition and harsh interrogation to make a clean break with the Bush administration's policies.

Stephen Soldz, director of the Center for Research, Evaluation and Program Development at the Boston Graduate School of Psychoanalysis, spearheaded the letter.

"I do think they have to find someone who represents a clear break" with Bush administration policies, particularly the use of multiple harsh interrogation practices on detainees, he said.

Brennan has publicly disavowed waterboarding, a form of simulated drowning. But Soldz said his group considers the excessive use of isolation, sleep deprivation, cultural and sexual humiliation and other techniques in combination as torture, and Brennan had not repudiated their use.

In a 2005 interview on PBS' "The NewsHour With Jim Lehrer," Brennan defended rendition as "an absolutely vital tool." In 2007, he told CBS News that the CIA's harsh interrogation program, which included waterboarding on at least three prisoners, produced "lifesaving" intelligence.

In his letter to Mr. Obama, Brennan said his critics have misrepresented his record.

"The fact that I was not involved in the decision-making process for any of these controversial policies and actions has been ignored," he wrote in a letter obtained by the AP. "Indeed, my criticism of these policies within government circles was the reason why I was twice considered for more senior-level positions in the current administration only to be rebuffed by the White House."