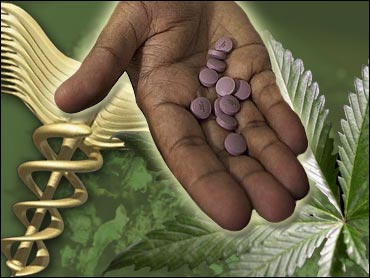 A marijuana pill appeared to relieve some of the symptoms of multiple sclerosis in the first scientifically rigorous study of the strongly debated drug.

The research, published this week in The Lancet medical journal, found that even though improvements could not be detected by doctors' tests, a greater proportion of patients taking the drug reported reduced pain and muscle stiffness than those taking fake capsules.

Experts said the mixed results make them tricky to interpret. Some said they were encouraged any improvement was noted, while others said any major effect would have shown up in the doctors' tests.

One study leader, Dr. John Zajicek of the University of Plymouth in England, said the research raises questions about what's more important: a doctor's measurements or the patient's perspective.

"I think if there's a conflict, it's what the patient feels which is important, so I think it's quite encouraging," said Roger Pertwee, a professor of neuropharmacology at University of Aberdeen, who was not connected with the study.

It is difficult to study because the disease is unpredictable and its symptoms hard to measure.

There have been anecdotal reports of the success of cannabis — the Latin word for marijuana — in treating MS symptoms, particularly muscle stiffness. However, there has been little scientific evidence.

The study was set up to test the theory that cannabis and cannabinoids reduce muscle stiffness and may help alleviate other MS-related symptoms.

It involved 630 multiple sclerosis patients from around Britain. One-third received a capsule containing whole cannabis oil; another third took one containing a synthetic version of a cannabinoid known as tetrahydrocannabinol, or THC. The rest got a fake capsule. Results were reported after 15 weeks of treatment.

"The stiffness as you move the limb on the bed and measure it carefully does not pick up a difference," said one researcher, Dr. Alan Thompson. "But when you look at the impact that (muscle stiffness) has on everyday life — on what the patient feels — then there is a difference."

Fifty-seven percent of the patients taking the whole cannabis extract said their pain had eased, compared with 50 percent on THC and 37 percent on dummy capsules.

For muscle stiffness, 61 percent on cannabis extract and 60 percent on THC reported an improvement, compared with 46 percent on fake treatment.

However, when an objective test of muscle stiffness was used, no difference was detected.

One explanation for the mixed results could be the muscle test, called the Ashworth scale, is not sensitive enough to detect changes that are meaningful to patients.

"It is very far removed from everyday life. Moving someone's leg up and down when they are lying flat on a table doesn't necessarily translate very well into what happens when they get up and try to walk around or do the housework or whatever," Thompson said.

In addition, the way the drug was given could have been a factor, Pertwee said.

"Oral capsules in vegetable oil ... are notoriously problematic in terms of absorption," said Pertwee, an expert in the pharmacology of cannabis. "What tends to happen is the cannabinoids are so fat soluble that they just sit in the vegetable oil and it's difficult to persuade the drug to go into the (blood)."

Pertwee said smoking is not considered a therapeutic option because marijuana smoke causes cancer and other forms of cannabis extract are possible, such as a mouth spray.

In addition, a high percentage of those on fake pills — 46 percent — reported improvements and about 77 percent of those on cannabis and 50 percent of those on dummy medication guessed what they were on because of the easily recognized side effects of marijuana, such as dry mouth and a lightheaded high.

"It makes their perception suspect in that there could have been, in effect, an enhanced placebo effect," said Dr. Andrew Goodman, director of the MS center at the University of Rochester in New York and deputy medical officer of the U.S. National MS Society, who was not involved in the study. "You know you're getting it, so therefore it feels like it works even better, perhaps. That's why the results are tricky to interpret."

However, Pertwee said the unusually high placebo effect may reflect natural cannabinoid activity in the body. Research indicates the body makes its own cannabinoids and levels are elevated in MS. It could be the body tries to self-medicate in response to the disease, he said.