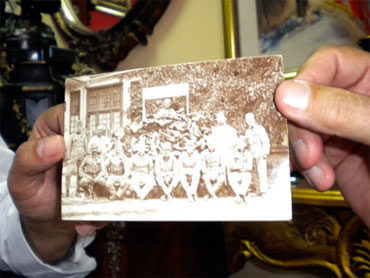 A postcard sent home by a Bosnian soldier in World War I has finally reached his family after 95 years, thanks to an American antique collector who delivered it personally to the man's grandson after buying it at a fair in Long Beach, Calif.

"Oh my God," was all Nadir Bicakcic could say when he recognized the face on the card.

For Nihad Eric Dzinovic, a 63-year-old retired jeweler living in California, it was as if one of the 200,000 old postcards he collected over the decades had come alive: In front of him stood someone who greatly resembled a face on the card mailed nearly a century ago.

Dzinovic often visits his native Sarajevo; sometimes he brings old cards he has acquired to show friends and local collectors. This week, he accidentally met Bicakcic, who was looking around a local antique shop in downtown Sarajevo, and the name rang a bell.

The next day he found the 48-year-old dentist and pulled out a postcard he had recently bought for $50 at a Long Beach antique show.

"Does this mean anything to you?" Dzinovic asked.

Bicakcic was intrigued by the address: "Asim Bicakcic (give it to Razija), Sarajevo, Old Town." It had been sent from Villany, Hungary, and bore a Hungarian stamp.

He started reading the elegant handwriting. The card was signed by "Edhem" and dated June 13, 1915.

"I'm sending you a photo with me on it," the text read.

"I turned the postcard around, looked at it for a while and froze," Bicakcic said.

The card had been made from a black-and-white photo. The picture, faded now, showed a small group of soldiers sitting in front of a pile of army boots.

The third from the right had a mustache and familiar eyes.

When Bicakcic was little, his aunts and uncles would see him sitting under a portrait of his grandfather, who died in 1941, and be stunned by how much alike they looked. After returning from World War I, the grandfather, Edhem Bicakcic, had returned to his wife, Razija, and became mayor of Sarajevo.

The card had found its way home.

Bicakcic said he plans to enlarge both sides of it and hang the copies on his wall. The original will be locked in his safe, next to other family treasures, never to wander again.