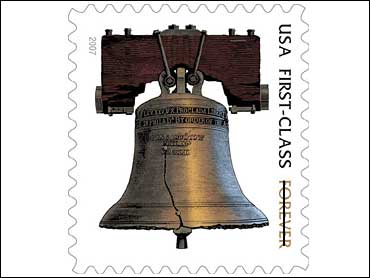 The cost to mail a first-class letter within the United States is now 41 cents, up two cents. It also costs more to mail a letter from the U.S. to other countries.

There's some good news in the new postal rates that went into effect Monday, says CBSNews.com's Lloyd de Vries: Mailing two- and three-ounce letters, such as wedding invitations and tax returns, is actually going down in price, from 63 and 87 cents to 58 and 75 cents, respectively. But envelopes that don't bend or are thicker than normal — such as eBay purchases — will cost more.

It's the first time the U.S. Postal Service is charging by the shape of the mail, and many mail-intensive businesses will take a big hit.

The new regulations mean larger envelopes and packages will automatically cost more than smaller mail. In the past, only especially large or odd-shaped pieces required extra fees.

Another bit of good news for most mailers in the new rates are the "Forever" stamps: On sale now at 41 cents, they will continue to pay for mailing a first-class letter no matter how high postal rates go.

Surprisingly, the Postal Service went back to the rate commission and asked for permission to charge less money for its flat-rate priority mail box than the panel had recommended — and got it, says de Vries.

All of this, however, is likely to mean longer lines at post office windows for the next several days.

Postmaster General John Potter has said that even with the higher prices the agency expects a deficit this year as it struggles to compete in a swiftly changing communications market.

The USPS reportedly is preparing to ask for another rate hike. This increase comes just over a year after the previous one, from 37 to 39 cents. That hike was the result of a congressionally-mandated escrow to help fund federal pensions; this one is because of high fuel and other operating costs.

International rates are also going up.

Letters to Canada and Mexico will rise to 69 cents and to most other countries to 90 cents. Other international services are being redesigned to more closely resemble domestic rates. The charges vary by country, as they have previously.

The fundraising stamp for Breast Cancer will increase to 55 cents. It is valid for first-class postage with the excess charge used to support research into breast cancer.

(Virtual Stamp Club)
There should be plenty of new 41-cent stamps in your post office, in all sorts of formats, reports de Vries: A flag stamp, the first Forever stamp, which shows the Liberty Bell, and the Jamestown Settlement commemorative (left), a triangular stamp that is the first to carry the 41-cent denomination. Sales of that stamp were reported brisk, with many post offices sold out on the first day it was put on sale.

Your 39-cent stamps are still good; just add a 2-cent stamp. In fact, nearly every U.S. postage stamp issued since 1861 is still valid for postage.