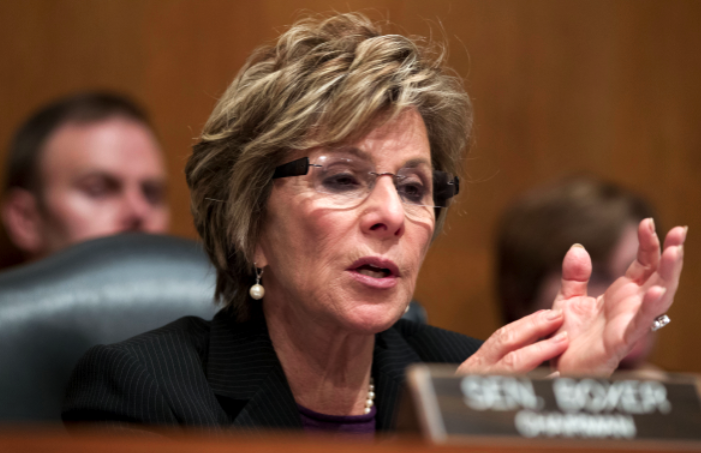 In the aftermath of superstorm Sandy, lawmakers from the hardest-hit states continue picking up the pieces of widespread damage left in the wake of the storm, facing billions of dollars worth of infrastructural damage, dozens of civilian casualties, and lingering outages that left millions of Americans without power for days or even weeks. Even as they look to make immediate repairs, however, a number of Democrats are also pushing for reforms that will prevent similar future catastrophes -- and are using the moment to renew calls for serious action on climate change.

During a Senate Environment and Public Works Committee hearing today on Sandy and its impacts, a handful of Democrats from New York, New Jersey, Connecticut, Maryland, and elsewhere, stressed the need to make strong investments into rebuilding states' infrastructure in a way that would withstand future storms. At the same time, they argued, climate change must be included in those efforts -- or Sandy-type storms will only increase in their frequency.

"New York has no choice: We must simultaneously adapt and fortify our coastline to protect against future storms," said Sen. Chuck Schumer, D-N.Y., in remarks at the hearing. "Basically the whole southern area of New York is three islands: Long Island, Staten Island, and Manhattan... And we're connected by a vast array of 100-year-old tunnels and bridges that were built long before climate change, global warming, was in anybody's mind. So, most of our infrastructure has been built without the necessary flood protections in their design. Sandy reminded us of a very stark reality - we can either invest now or we'll pay later."

In the immediate aftermath of the storm, some public figures seized on the moment to highlight what many believe are the real-life impacts of climate change: New York Mayor Bloomberg, an independent known for backing centrist politicians from both the Democratic and Republican parties, endorsed President Obama days before the election, primarily citing climate change, and Sandy, as the reason.

The challenge for climate change activists, however, will be actually getting legislation through Congress. Republicans have in recent years become increasingly reticent to legislate the issue, and many dispute the notion that it is a legitimate phenomenon.

The scientific community largely agrees about the existence of climate change, but experts are not unanimous on the impact it might have had on Sandy: As a recent Reuters piece points out, some scientists say the storm may have been the product of a rare collision of weather systems, while others say the effects of climate change may have exacerbated already unique circumstances.

Regardless, congressional Democrats are seizing on Sandy as a channel through which to relate longtime arguments about the need to cap carbon emissions and impose tougher environmental regulations on corporations.

After the hearing, which was dominated by Democrats but also featured remarks from Sen. David Vitter, R-La., committee chair Barbara Boxer, D-Calif., told reporters she plans to push the Water Resources Development Act and hold a hearing on climate change in the early days of the coming congressional session. She also said "there are several pieces of legislation that will be written on climate change," and that despite years lost on the issue "because of deniers," Senate Democrats are prepared to "to put together the best ideas and try again."

Boxer also argued, however, that Democrats have already joined with the president to do as much as possible with regard to climate change despite the Republican pushback.

"I feel as you do -- that the clock is ticking and [superstorm] Sandy has shown us all what the scientists sitting right in this room the day I got the gavel -- they all were sitting right here, and they told us exactly what would happen and it's all happening...Anyone with a heartbeat and a pulse can tell that things are changing," she said, after Whitehouse delivered his remarks. But, she said. Democrats have already fought - and won - a number of GOP attempts to roll back important regulations.

"President Obama's policies have reduced the carbon in the air and will over the next 20 years," she said. "I just feel people have to understand that the progress that we've made... We will make more progress."