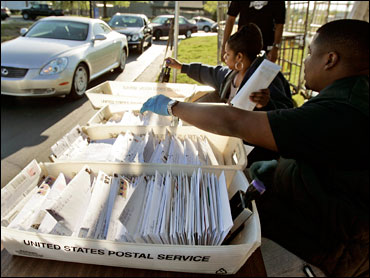 Postmaster General John Potter and other top agency officials were facing the House Oversight subcommittee on the federal workforce and post office Wednesday.

The post office was $2.8 billion in the red last year and is facing even larger losses this year due to the sharp decline in mail volume in the weak economy.

Potter has raised the possibility of cutting mail delivery from six days a week to five, and is also seeking relief from the requirement to set aside several billion dollars annually to prefund retiree medical care.

Last week, the post office said it plans to offer early retirement to 150,000 workers and is eliminating 1,400 management positions and closing six of its 80 district offices across the country in cost-cutting efforts.

The agency posted a $384 million loss in the first quarter of the fiscal year - October through December - which is usually the busiest period because of the holidays.

Officials said the economic recession contributed to a mail volume drop of 5.2 billion pieces compared with the same period last year. If there is no economic recovery, the USPS projects volume for the year will be down by 12 billion to 15 billion pieces of mail.

The USPS does not receive a taxpayer subsidy for its operations.