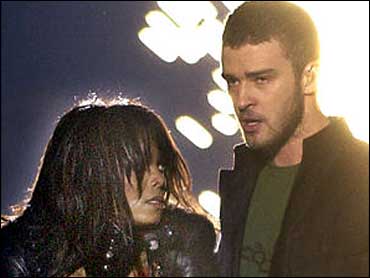 The network said Wednesday it had "unfortunately concluded that the atmosphere created by this week's events has made it too difficult for many of our affiliates to air this shot."

NBC's decision was criticized by John Wells, the executive producer of the popular and long-running medical drama, who said such "affiliate overreactions" have a "chilling effect" on dramatic integrity.

In a statement, Wells called the Jackson incident at last Sunday's Super Bowl "inappropriate and deplorable on a broadcast intended for viewers of all ages."

But "the incidental exposure of an elderly woman's breast in the context of a medical trauma is not comparable," he said.

Viewers advised of a show's adult content are capable of "making the distinction and adjusting their viewing habits accordingly," he said.

"This type of network behavior is one of the primary reasons that so many of today's producers and viewers are increasingly turning to HBO and other cable outlets that do not censor responsible storytelling," Wells said.

In its statement, NBC agreed that the scene, in which an 80-year-old woman receives emergency treatment, is "appropriate and in context" and noted it would have aired late in the evening, after 10:30 p.m. EST.

But the network said it couldn't ignore the furor that followed a musical number in which Justin Timberlake pulled off part of Jackson's costume, exposing her breast to 89 million viewers.

After consulting with its affiliate board, the network asked the producers of "ER" to remove the nudity.

The one-second nudity provoked complaints from viewers and an investigation by the Federal Communications Commission that, potentially, could expose CBS and its affiliates to millions of dollars in fines.

Jackson took responsibility, saying it was a surprise stunt that went too far.

In an exclusive interview with CBS affiliate KCBS, Timberlake said he was "frustrated" by the post-Super Bowl controversy over what he has called a "wardrobe malfunction" during a breast-baring bump-and-grind dance number with Janet Jackson.

CBS, which is airing Sunday's Grammy Awards, said it would implement a video delay system to avoid similar problems.