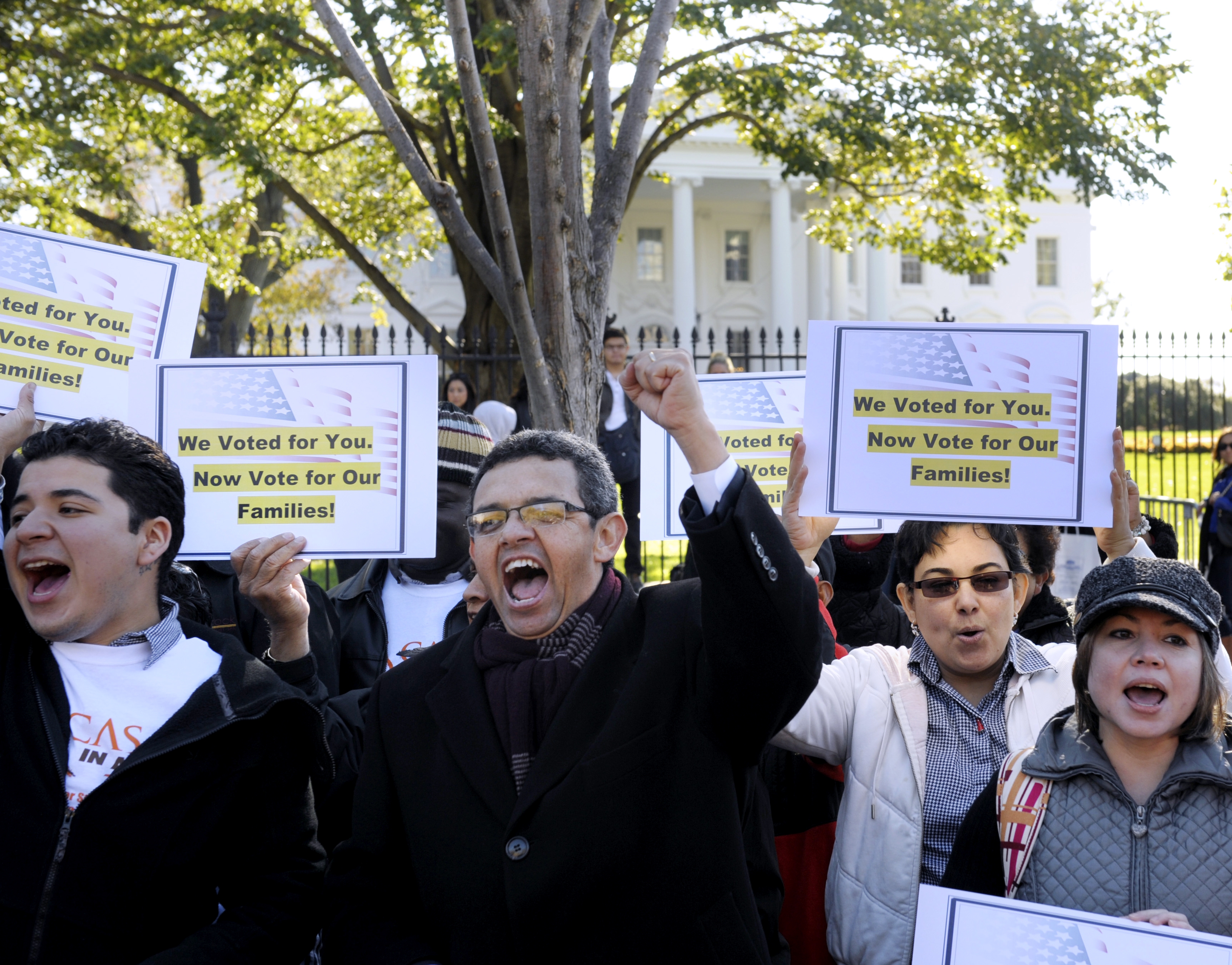 In the aftermath of the presidential campaign and with pressing business awaiting them, Congress returns to work this week facing a landscape that, in many ways, remains unchanged: Democrats control the White House and the Senate, the House of Representatives is led by Republicans, and signs of gridlock are already brewing. Nevertheless, Democrats are already expressing confidence about reaching a deal on one of the most contentious and bitterly partisan legislative goals in recent memory: Immigration reform.

The desire for reform is hardly new: For years, Democrats, activists, and a handful of Republicans have pursued laws that would not only provide legal status and a pathway to citizenship for some undocumented immigrants, but also improve the nation's visa system and secure the border.

In recent years, though, these efforts have recently taken on an increasingly partisan nature. Many of the Republicans who supported comprehensive immigration reform in the past have backed away from that position, and the party itself has adopted a harsh tone toward undocumented immigrants: Where Democratic rhetoric includes a path for citizenship and sometimes amnesty, Republicans have often touted electric border fences and "self-deportation." The likelihood of passing reform legislation, once considered merely near-impossible, has over the last two years taken on epically bad odds.

In light of the GOP's electoral shellacking among Latino voters on Tuesday, however, Democrats are ready to put the issue back on the table - and they're banking on the possibility that Republicans can't afford to say no.

The key to GOP survival?

As the GOP contemplates a course forward following Mitt Romney's presidential defeat this week, much has been made of the party's "soul-searching" efforts to determine how to broaden its reach - particularly in light of Romney's staggering loss to President Obama among non-white voters. According to exit polls, much of Romney's support came from white males, of whom he won 62 percent, and white voters in general, of whom he won 59 percent overall.

While his support among African-Americans was dismal at 6 percent, it was Romney's 44-point loss among Hispanic voters that has caused the most immediate public stir. After all, unlike with African-American voters, Republicans have had some success building Latino support in the past: George W. Bush was able to win 44 percent of the Hispanic vote in 2004, and McCain captured 31 percent in 2008 (Romney only pulled in 27 percent on Election Day). Meanwhile, the Latino population in America has grown exponentially: Latinos accounted for more than half of the U.S. population increase between 2000 and 2010, according to the 2010 census.

Unsurprisingly, Romney's weakness among Latinos cost him dearly on Tuesday, particularly in battleground states like Nevada, Colorado, Virginia and Florida, all of which boast large - and growing - Hispanic communities. If future Republican candidates don't perform better among that group, red states like Arizona and even Texas could be on a path to become battlegrounds themselves.

As Democrats and activists see it, the GOP knows it will fade into irrelevance if it doesn't work doubly hard to regain lost ground among Hispanic voters. Which means that blocking comprehensive immigration legislation - which most Hispanics support - is not a badge the party should be eager to wear.

"I'm hoping there are some savvy Republicans who say, 'Let's deal with this issue, let's get it off the table so we can compete for the Latino vote on issues like values and the economy and the American dream, where I think Republicans could be competitive," said Arturo Vargas, executive director of NALEO Educational Fund. But "as long as this is their albatross," he said, "as long as we keep hearing things like self-deportation and no and no and no, it's just going to be the monkey on their back that drags them down with regard to Latinos."

Republicans aren't the only ones who have a political motivation for tackling immigration reform: Mr. Obama continues to take heat from Latinos for having so far failed to deliver on his 2008 campaign promise to do so, and reform activists believe that the president has a newfound responsibility to making good on that promise considering that Latinos effectively delivered him a second term.

"Latino voters were driven to the polls this year because they supported a student's goal to be the first one in their family to go to college, a worker's right to be treated with respect, a family's dream to stay united in the only country they call home," said Daniel Rodriguez, member of the National Coordinating Committee of United We Dream Network, in a conference call yesterday.

"We proved what we could do with that renewed sense of motivation," he said, referencing Mr. Obama's June 15 mandate halting deportation of many young undocumented immigrants. "Now we have a check to cash."

Expectations for a deal?

According to activists and congressional aides alike, it's too early to say exactly when a deal might come about, particularly given the impending "fiscal cliff" that Congress is scrambling to avoid. But one Senate Democratic aide said the pieces of the legislation are mostly in place.

"Obviously we have to deal with the fiscal issues coming up first and we're fully engaged on that. But it's definitely a very high priority for us," the aide said. "The good news is that on the policy side very little needs to be done. There's a ton of legislative language that's been drafted over the years. You basically have a menu already that you could choose from."

In the meantime, reform activists say they'll continue grassroots efforts to educate and pressure lawmakers about the topic on the state and local level.

When it comes to the House of Representatives, they say, it's a matter of convincing Republican members that a vote for reform won't be necessarily be a ticket to congressional loss.

"What we need to do... is to convince them and to educate and teach them that... if they want to succeed, to ever be relevant nationally as a Republican party, [they must] stop the pandering to the extreme right," said Mark Shurtleff, Utah's Republican attorney general, in a conference call yesterday.

Even if House Republicans find compelling incentives in passing some kind of reform legislation, it's unclear how many concessions, if any, they'll be willing to make to pro-immigration groups. Moreover, they're unlikely to agree to a deal that will enable Democrats take credit for what is sure to be hugely popular legislation among the nation's fastest-growing community.

Nevertheless, all indications suggest a willingness among Republican leadership to begin some sort of negotiating process.

Immigration, Boehner said, is "an important issue that I think ought to be dealt with."

"This issue has been around far too long and while I believe it's important for us to secure our borders and to enforce our laws, I think a comprehensive approach is long overdue, and I'm confident that the president, myself, others, can find the common ground to take care of this issue once and for all," he said.

What exactly that would entail remains to be seen. In a press conference today, Boehner argued for "a common sense, step-by-step approach" to reform, but declined to say whether that would include a path to citizenship.

"I'm not going to get into any of the details of how you would get there," he said. "It's just time to get the job done."

Even so, Democrats sounded hopeful about the prospect of finding common ground.

"I am optimistic," said Sen. Chuck Schumer, D-N.Y., at a Christian Science Monitor breakfast on Thursday morning. "I think [Republicans] are going to want to do it now."