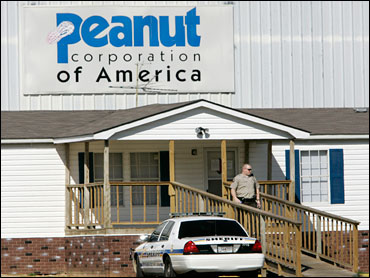 Private lab tests show there may have been salmonella at a second plant operated by the peanut company at the center of a national outbreak, Texas health officials said Tuesday.

The Peanut Corp. of America temporarily closed its plant in Plainview, Texas, Monday night at the request of health officials after the tests found "the possible presence of salmonella" in some of its products, the Texas Department of Health said in a statement.

It does not appear that any of the possibly contamintated products from the Texas plant reached consumers, officials said. The Texas plant produces peanut meal, granulated peanuts and dry roasted peanuts.

The company is being investigated in connection with an outbreak has sickened 600 people and may have caused at least eight deaths. It also has led to the recall of more than 1,800 consumer products. Peanut Corp. closed its plant in Blakely, Ga., last month after federal investigators identified that facility as the source of the salmonella outbreak.

An Associated Press investigation last week revealed that the Plainview plant, which opened in March 2005 and was run by a subsidiary, Plainview Peanut Co., operated uninspected and unlicensed by state health officials until after the company came under investigation last month by the Food and Drug Administration.

Doug McBride, spokesman for the Texas Department of State Health Services, said Peanut Corp. agreed to shut the plant voluntarily as it works with the state agency.

The Texas closing comes a day after the FBI raided the company's plant in Georgia, hauling off boxes and other material. Agents executed search warrants at both the plant and at Peanut Corp.'s headquarters in Lynchburg, Va., according to a senior congressional aide with knowledge of the raids. The official spoke only on condition of anonymity because he was not authorized to speak publicly on the matter.

Plainview Mayor John Anderson said Tuesday the Texas plant employed 30 people. It was not immediately clear how they would be affected by the suspension.

"I'm just very sorry to hear that," Plainview Mayor John Anderson said Tuesday when a reporter called with news of the suspension. "Hopefully it's just a temporary suspension. That'd be the best of all worlds."

Food safety attorney Bill Marler, one of several plaintiff's attorneys who has filed civil lawsuits against the company since the outbreak started, said it was the latest disturbing turn for Peanut Corp.

"It is clear that PCA is not a producer that companies could — or can — rely on for a safe product," he said.