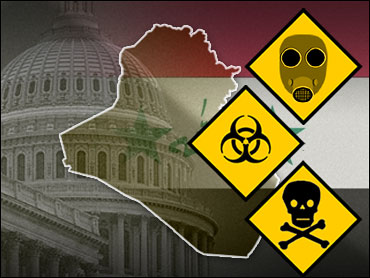 While not a "smoking gun" because it did not reveal any active nuclear weapons program, the find was possible evidence of an Iraqi plan to resume banned research.

It could deflect criticism that in arguing for war, the Bush administration overstated the weapons Iraq had or was developing.

At the same time, another piece of evidence the administration has cited has come under new scrutiny.

According to The New York Times, the State Department's intelligence unit has questioned whether two trailers found in northern Iraq are actually mobile biological weapons factories, as the CIA, Defense Intelligence Agency, and White House have claimed.

Since the war, U.S. teams looking for evidence of Iraq's alleged chemical, biological and nuclear weapons programs have been chasing leads and tips from Iraqis who stand to win reward money offered for evidence. So far no weapons have been found.

Before the second Gulf War, U.S. and allied intelligence agencies said they had evidence that Iraq was seeking to reconstitute its nuclear weapons program, although some of that evidence has since been debunked.

Other evidence, such as reports that Iraq tried to import precision-made tubes for centrifuges, was hotly debated, with some experts saying those tubes were for conventional weapons.

Earlier this year, the U.N. agency said there was no new evidence or indications that Iraq was working to revive the program.

The scientist, Mahdi Shukur Obeidi, said he had kept the parts buried in his garden at his Baghdad home on the orders of Saddam's government, according to the intelligence official, who spoke on the condition of anonymity.

Once sanctions against Iraq ended, the material was to be dug up and used to reconstitute a program to enrich uranium to make a nuclear weapon, Obeidi claimed to U.S. officials.

U.S. authorities believe Obeidi's statements are credible, and they are regarded as evidence that Iraq had an effort to hide parts of its original programs from U.N. inspectors.

Still, the intelligence official acknowledged the find was not the "smoking gun" that U.S. authorities are seeking to prove the Bush administration's claims that Iraq had an active program to develop a nuclear weapon.

Before the 1991 Gulf War, Obeidi headed Iraq's program to make centrifuges that would enrich uranium for nuclear weapons, the official said. Most or all of that program was dismantled after U.N. inspections in the early 1990s.

Details of Obeidi's activities during the past decade were not immediately available, although he was interviewed often by inspectors from the U.N.'s International Atomic Energy Agency in 2002, the official said.

Assembled, the components would not be useful in making much uranium. Hundreds of centrifuges are necessary to make enough to construct a nuclear weapon in such programs.

Obeidi and his family have left Iraq, the intelligence official said.

After its defeat in 1991, Iraq was forced to reveal a nuclear weapons program that the U.S. says could have produced a bomb by 1993.

Earlier this year, the Bush administration said Iraq was trying to reconstitute its nuclear program. In January, President Bush quoted British intelligence saying Iraq had "sought significant quantities of uranium from Africa." That claim now appears to have been based on forged documents obtained by Britain.

Addressing the Security Council in early February, Secretary of State Colin Powell claimed Iraq was trying to revive its nuclear weapons program by importing centrifuges and trying to obtain specialized magnets and rotors.

In the same speech to the Security Council, Powell said Iraq had some 18 mobile weapons trailers.

The two trailer discovered in Iraq carried no traces of germs used for biological warfare.

But the CIA and DIA, in a report released last month, rejected other explanations for the trailers and said they resembled descriptions of mobile biological factories provided by human sources.

However, the State Department's Bureau of Intelligence and Research said in a June 2 memorandum that it was too early to conclude that they were weapons factories. The memo said each trailer found so far would have been only one of a system of two or three trailers needed to form a single, working lab. No other trailers have been found.

The report also noted that there were other plausible uses for the trailer, like as a system for refueling Iraqi missiles.

The Observer newspaper of Britain has reported that experts there believe the trailers were used for producing hydrogen to fill weather balloons used by artillery units. A report on the trailers posted on the CIA website acknowledges that hydrogen production was one possible purpose of the labs.

The State Department bureau was not consulted by the DIA and CIA for the two agencies' report on the labs, The Times reported, an omission that some officials thought was strange given the importance of the matter.