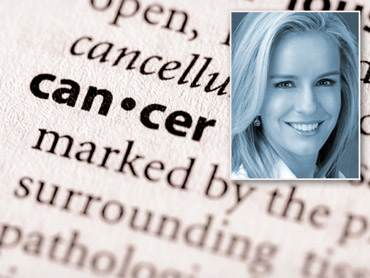 There's new hope for patients with terminal brain cancer, thanks to a promising technique being tried.

CBS News Medical Correspondent Dr. Jennifer Ashton reports that the experimental procedure "could become a major breakthrough in the treatment of brain cancer."

Ashton went to Pittsburgh's Allegheny General Hospital, one of four in the United States conducting trials of the use of a fluorescent compound called 5-aminolevulinic acid (ALA) in patients diagnosed with a glioma, the most common form of primary brain tumor.

Gliomas hit some 10-12,000 Americans each year and, says the hospital, "vary in severity. High-grade gliomas … are rapidly progressive and fatal malignant tumors. Low-grade gliomas are more treatable, but also pose a risk of becoming cancerous overtime."

With aggressive treatment, Ashton points out, the average life expectancy for someone with a glioma is only 13 months.

The compound, Ashton explains, is given by mouth, then ultraviolet light is used to illuminate brain cancer cells, enabling surgeons to see them better and remove a bigger portion of them, without endangering surrounding healthy tissue.

Ashton visited with John and Betty Volna. He had the surgery and is doing well.

The director of the hospital's Neurosurgical Oncology unit, Dr. Matthew Quigley, says, "It turns out that the stuff that looks perfectly normal under the surgical microscope is tumor. We didn't know that until we had the drug."

Ashton says the other three U.S. hospitals using the procedure are Case Western, in Cleveland, Lutheran Advocate, outside Chicago, and Dartmouth Hitchcock, in New Hampshire.

Each has to petition the Food and Drug Administration through a grant-type process to allow it to conduct the clinical trial with 50 patients, and document the success rate.

This began in Germany, Ashton adds, where use of the drug is standard in glioblastoma surgery. It crossed the Atlantic when a neurosurgeon read about it in a medical journal. In terms of changing the standards in the U.S., the hope is that if enough of the neurosurgical community throws its support behind it over the next few years, they can take comprehensive research to the FDA.

There's no data to support that it might help battle other forms of cancer, Ashton says, but the neurosurgeons she spoke with said they think there's potential for colon cancer surgery, because of the similar nature of the tissue and how it would react to the drug and ultraviolet light.