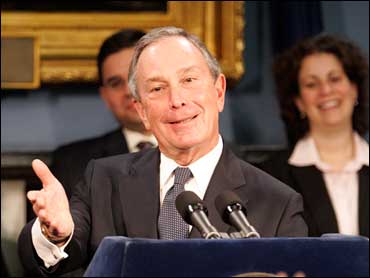 Next week, an intriguing caucus at the University of Oklahoma could be an important detour on this year's road to the White House.

It was the idea of Former Democratic Senator and Oklahoma Governor David Boren, who reached out to some former colleagues to push a bipartisan agenda ranging from energy policy to immigration.

"Partisan polarization has just been paralyzing this country," said Boren, now president of the University of Oklahoma.

"This is not about 'how do you start a third-party insurgency'," Whitman said to CBS News correspondent Michelle Miller.

"We continue to be loyal party members," Whitman said, "but the parties are in trouble right now, and we're not responding to the American people. We're not providing them with the kind of answers that they want."

Why California fires were so dangerous, but could have been worse

Although he has stated that he is not a candidate, it's the inclusion of New York City Mayor Michael Bloomberg that has given the gathering its buzz. The billionaire businessman-turned-politician, recently left the Republican Party to become an Independent, fueling speculation he might actually jump into the Presidential race.

"What we want to do is find a way to take an independent approach to government," said Bloomberg.

The timing may be good; Americans' allegiance to the two major parties is at an all-time low. According to a December 2007 CBS/New York Times Poll, 39 percent now call themselves Independent, 35 percent Democrat and only 26 precent Republican. That's a steady slide from two decades ago, when party members outnumbered independent voters. A 1988 CBS News Poll showed that only 31 percent of Americans called themselves Independents at that time.

"The very possibility of Bloomberg or someone else running and launching a really credible campaign will, I hope, serve as some leverage to bring the two parties back to the center," said Boren.

Miller reports that the primary goal of this meeting is to influence the current field of candidates. And if that doesn't work, some observers hint that if ever there was a year a third party candidate could run and win...2008 would be it.